Wildcats kept energy up in win over Panthers 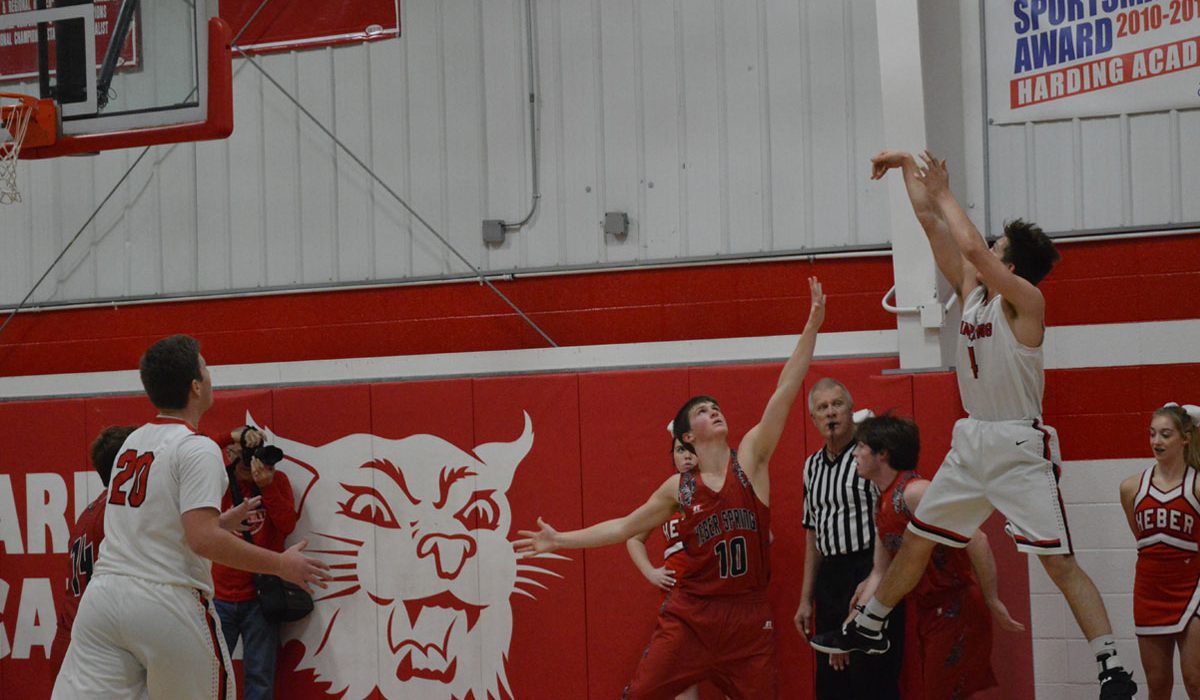 Harding Academy's Brady Palmer hits a buzzer-beater to end the first half. Photo by Meredith Palmer.

The Wildcats had three players score in double figures as Brady Palmer, Travis Turley and Pate Fullerton had 15, 14 and 12 respectively. Panther Jordan Adkins led all scorers with 24 points, including four triples.

Coming off a win at Rose Bud the night before, Coach Brad Francis said he looked for ways to make sure the Wildcats did not come out sluggish.

“We tried to jump out in the press and get after it and avoid a lull,” Francis said. “Just looked to do something to keep our energy and intensity up.”

The Wildcats took a 42-30 lead going into the fourth quarter and never let the Panthers get closer than eight. Palmer created a highlight reel after he caught a pass mid-air and laid it in off the glass while his feet never touched the ground to make it 44-32 with 6:51 remaining.

Adkins forced a Wildcats timeout after he hit a corner three to make it 55-46 with 2:59 remaining. Fullerton hit two free throws to extend the Wildcats lead to 59-48. He had 12 points in the quarter. The Panthers showed life after Brandon Blankenship hit a three to make it 59-51 with 1:54 remaining but was quickly answered by a Fullerton triple on the Wildcats next possession to extend the lead back to 62-51.

Both teams scored a combined 48 points in the fourth quarter, hitting seven triples.

The Wildcats turned up their defense in the third quarter, holding the Panthers to eight points. Atkins made it a nine point game after he hit a jumper to make it 37-28. Palmer impressed the crowd after he took off on the fastbreak and made a spin move layup to extend the Wildcats lead to 42-30 going into the fourth.

Turley opened the scoring in the second quarter with a three to give the Wildcats a 20-15 lead with 6:19 remaining. Adkins cut the Wildcats lead back down to two after he hit a three of his own to make it 22-20. The Panthers called a timeout after Turley hit a two to make it 26-22 with 2:52 remaining. Turley had nine of the Wildcats 13 points in the second. Palmer ended the quarter on a buzzer beater jumper in the corner with two defenders around him to make it 30-22 heading into the half.

The Wildcats jumped out to an early 4-0 off of back-to-back fastbreak buckets by Morgan and Palmer. The Panthers had chance to tie the game but failed as Jaden Johnson went one of two from the line to make it 6-5 with 4:20 left. Francis gave the Wildcats some breathing room after he hit a left corner three to make it 11-7 with 3:02 remaining. The Panthers pulled within two after Adkins recorded a steal and scored on a fastbreak layup to make it 17-15 with 37 seconds left. The Wildcats turned it over on the next possession but the Panthers could not capitalize at the buzzer trailed 17-15 heading into the second.

Both teams hit the road as the Wildcats face the Mountain View Yellowjackets on Jan 26 and the Panthers take on the Bald Knob Bulldogs on Jan 27.