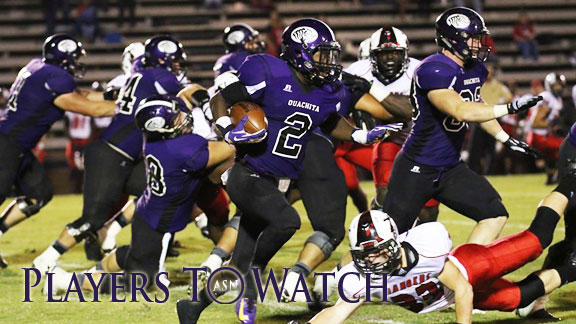 Football season is less than three months away. It’s time to start looking at some of the players likely to have an impact in 2016.

Bryan Allen, Arkansas Tech, RB, sophomore
Allen’s freshman season was stellar. His 1,150 yards rushing for the season is the third most in ATU history and his 279 against Ouachita is the second-highest single game total. The backfield is full once again with junior Brayden Stringer and fellow sophomore Kristian Thompson, but there should be plenty of opportunity for Allen to shine this season.

Trevon Biglow, Harding, DL, senior
The senior can get into the backfield quickly. Biglow had 9.5 tackles-for-loss last year and all of them were sacks. He is now fourth on the HU list in sacks (17.0) since 2000 and at his current pace could be at the top of that list by midseason. One of three of last season’s starters on the defensive line returning for their senior campaigns, the Bisons’ front line of defense should be formidable.

Michael Bowles, Lyon, RB, senior
As a junior, Bowles racked up 1,431 yards (third in the NAIA) and averaged 4.9 yards per carry. He was also in the top 15 in the country in all-purpose yards. Bowles is one of a very small group of seniors on the squad and will definitely be one of the leaders on the team.

Jaquan Cole, Henderson State, RB, senior
The Reddies did not lose a single player on the two-deep of the offensive line to graduation. That means strength up from for Cole to run behind and then burst into the open field. The senior tallied 1,189 yards in 2015, fourth most in HSU history, and is poised to become the first Reddie back since Blake Christenson (2002, 2003) break the 1,000 yard barrier twice. He was last season’s Offensive Player of the Year in the GAC.

Josh Davis, Henderson State, LB, senior
Don’t forget about the Reddies’ defense, which was consistent throughout the season, holding nine of the 11 GAC opponents it faced to 17 points or less, and Davis is an anchor in the middle. In 2015, he was one of only two unanimously selected to the All-GAC First Team, recording 103 tackles, 15 tackles-for-loss, 1.5 sacks and he forced two fumbles.

Willie Duncan III, Arkansas-Pine Bluff, LB, junior
The Lions need a big performance from the defense and Duncan could be that leader in the middle, especially with the graduation of Jontrell Lockett. Duncan is solid against the passing game and led the team in tackles last season, averaging 10.7 per game.

Jeremy Jackson, Arkansas-Monticello, RB, junior
Jackson’s impact can be felt on any down. He was the team’s leading rusher in ’15 and picked up 5.2 yards per carry. He is also an able receiver and will get his offense good starting field position with consistency as he averaged 20.1 yards per return on kickoffs. Jackson’s role may increase in ’16 with a new signal-caller to work with as the Weevils to try improve offensive numbers this year.

Drew Morgan, Arkansas, WR, senior
The ground game will likely be a part of what is regularly a balanced offense in Fayetteville with Coach Bielema. But with graduations and injuries to the running back corps, the air attack shouldn’t go unnoticed and Morgan can be a big part of that. As a junior, Morgan led the team in receptions (63) and receiving yards per game (64.8) while hauling in 10 touchdown receptions as well.

Kris Oliver, Ouachita, RB, sophomore
The GAC was loaded with stellar freshman running backs in 2015, and Oliver may have been the best. He was named the Don Hansen National Freshman of the Year, running for 1,176 yards and 19 touchdowns (a school record for rushing TDs by a freshman) in 2015. Oliver is also a strong receiver out of the backfield and along with Pope (see below) make a solid one-two punch that goes beyond the numbers on their jerseys.

Park Parish, Harding, QB, senior
Parish is a versatile player, but then any quarterback in Coach Huckeba’s offensive scheme has to be. He rushed for 864 yards and 19 touchdowns last season, while passing for 783 yards and five more TDs, giving up only two interceptions. With two years as an understudy, Parish stepped seamlessly into the starting QB role in 2015 and was named to the First Team All-GAC as a utility player for his overall effectiveness.

Seth Peters, Hendrix, QB, senior
Peters has started in all but one of the games in which he has played during the last three years. He owns school records in pass attempts, completions, yards, touchdowns, completion percentage, efficiency and total offense yards. The Warriors have improved in each of those three years and Peters, along with 22 other seniors, would like to make a deep run in the playoffs. The potential and opportunity are there.

Ke’vontae Pope, Ouachita, KR, senior
Pope has been the ‘go-to’ guy for three years in Arkadelphia, leading the team in receptions and receiving yards in each of his seasons with the Tigers. Only Harding’s offense was more run-heavy (rushing to passing) in the GAC last season than Ouachita’s and with a focus on Oliver, Pope should be able to get free for catches and scores.

Hendrix running back Dayton Winn had the most rushing yards of any college back in Arkansas in 2015. Photo courtesy HC Sports Info.

Barrett Renner, Southern Arkansas, QB, sophomore
Renner was the All-GAC First Team quarterback as a freshman and named the league’s Freshman of the Year. With a strong arm and good decision-making ability he passed for an SAU single-season record 33 touchdowns and (in keeping with the ‘three is a magic number’ theme) 3,333 yards. Three starters on the O-line from 2015 have graduated, but there is strength coming up and four of the his top five receivers will be back this year.

Warren Wand, Arkansas State, RB, sophomore
Wand had a solid season in his freshman campaign, behind Michael Gordon, as the Red Wolves tore through the Sun Belt. But with the graduation of Gordon, the load of the ground game now falls to Wand and backfield mate Johnston White. Wand’s speed will be fun to watch and the running game could be big again to start the season as Arkansas State will have a new QB to lead the charge in 2016.

Jatavious Wilson, Central Arkansas, WR, junior
Wilson can catch, run and return and is useful to the Bears’ offense in multiple facets. He and Desmond Smith should see plenty of action. It was a balanced offensive attack in 2015, but with star running back Blake Veasley moving on, will the passing game play more of a role this year?

Dayton Winn, Hendrix, RB, senior
He topped the charts for college running backs in the state last season with 1,761 rushing yards, and topped the 100-yard mark in 10 of 11 games. That total was good enough for fifth in the nation in D-III. The 2,732 all-purpose yards was at the top of that list nationally. Throw in 22 touchdowns scored in various ways and Winn has to be one of the most difficult players for opposing defenses to plan for each week.