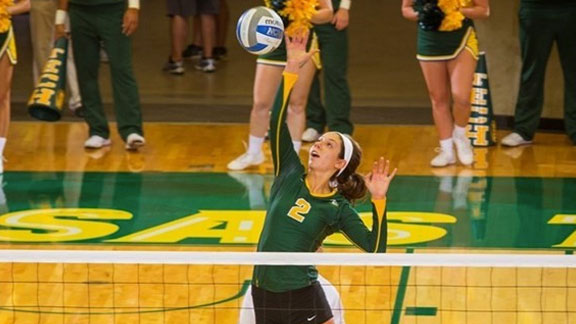 The summer is here and will be gone before you know it. And volleyball season is just around the corner. Here are 16 players that are likely to have an impact on Arkansas college volleyball in 2016.

Alyssa Arnold, John Brown, S, junior
Arnold recorded more than 1,300 assists in 2015, which was second in the SAC, and was also third on her team in digs. However, with the graduation of Libby Blasingame and All-American Audrey Dearien, Arnold will be directing her sets to a different group of hitters this year as the Golden Eagles try to earn double-digits in wins in the SAC for a fourth straight year.

Kori Bullard, Ouachita, MH, junior
Bullard fills the middle well and has averaged 72 blocks per season in her first two years at Ouachita. She is a two-sport star who also plays basketball for the Tigers, and may be called upon more in 2016 for her offense as well. Bullard was second on the team in kills last season at 2.92 per set – behind only Abby Pickett, the GAC Player of the Year – and she hit .292 on the year. 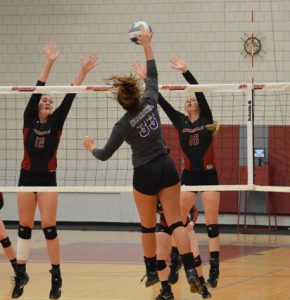 Kennedi Coleman, Arkansas-Fort Smith, OH, senior
With trips to the Elite Eight in 2015 and to the Final Four in 2014, this UAFS senior class has a lot of quality experience racked up. Coleman is one of those seniors who could make a big mark this season. She led the team in kills at 3.63 per set while hitting .217. Her defense was effective also as she had 71 blocks and 108 digs. Coleman was the only player to play in and start all 33 matches last year.

Lauren Corby, Arkansas-Pine Bluff, OH, junior
Points came at a premium last season for the Lions, but Corby along with Kayla Dowdell were key on offense during the wins. Dowdell has graduated and Corby should fill an even larger role this year. She had a near triple-double in the season finale, which was a win for UAPB. Can that be the springboard for a strong year in 2016?

Hunter Eshnaur, Arkansas Tech, OH, sophomore
As a freshman, Eshnaur led the GAC in points, earning 4.4 per set for her team. She was also third in the league with in kills (3.76 per set) and in service aces (.44 per set). Eshnaur was the 2015 GAC Freshman of the Year. She will be receiving passes from a new setter this year, with the departure of Sarita Stegall, but Arkansas Tech has become a factory under coach Kristy Bayer in developing setters in recent years and her scoring pace should continue unabated.

Zoe Hardin, Harding, MH, sophomore
Hardin is a force on the inside and could be big in bringing Harding back to the top of the GAC and beyond. She averaged 1.38 blocks per set, which was seventh in Division II in 2015, and had 159 total. Hardin also averaged 2.72 kills per set while hitting .315 on the year, third in the GAC. This is a team that should only get better over the next three seasons.

Adrianna Hartmann, Henderson State, MH, freshman
Offense was lacking for the Reddies in 2015, but coach Kristee Porter going into her second season on the job was able to sign a strong class in the winter. Hartmann could bring immediate help to the court. The incoming freshman recorded more than 500 kills in just her junior year at Fredericksburg (Texas) H.S. At 6-foot-2, Hartmann, along with 6-foot-3 sophomore Gabby Ginapp, may be able to shore up the HSU defense in the middle.

Serena LaDuff, Southern Arkansas, OH, senior
LaDuff, the GAC Newcomer of the year in 2015, led the league with 3.90 per set and recorded 499 on the season. She is a leader on a strong senior class that should help the transition for Brittany Davis from assistant into the position of head coach. LaDuff notched a league-high 26 kills in a five-set match against Southern Nazarene last season.

Audra Nailling, Williams Baptist, MH, sophomore
Nailling is the leading returner in blocks for the Eagles and has the second best hitting percentage returning. The sophomore brings height to the middle and is effective on offense. WBC has won 20 or more games in seven of the last nine seasons and are averaging 23 wins per season. Nailling will be key to keeping that streak going.

M.C. Rogers, Hendrix, OH, senior
Whoever takes over as head coach for the Warriors will inherit a roster that is heavy laden with seniors full of experience, led by Rogers. The 6-foot-2 outside hitter led the team in kills (3.17 per set) and was second in digs (3.35 per set) and second in service aces (35). Her presence can be felt all around the court and in the midst of the Warriors’ playoff run to the D-III national semifinals, Rogers had back-to-back games of at least 20 kills and at least 22 digs.

Markie Schaedig, Arkansas State, DS, senior
As a junior, Schaedig had 537 digs, which was 10th on the ASU list for a season and was second in the Sun Belt and 13th in Division I. She also owns the top spot on that list as well (762, 2014). Schaedig was the Sun Belt Defensive Student-Athlete of the Year in ’15 and an honorable mention All-American in ’14. She is one of five seniors and could help lead the team back to return trip to the NCAA Tournament.

Edina Selimovic, Little Rock, MH, senior
Selimovic is in Little Rock record books and in the top 10 in career block assists, aces and total blocks and her career hitting percentage of .318 is currently at the top of that list as well. In her time with the Trojans, Selimovic has started in all 63 matches and played in all 224 sets in which she has had an opportunity to play. One of four seniors on the roster, the team needs her offense and leadership to keep pace with Arkansas State in the Sun Belt this year.

Rachel Sharp, Central Arkansas, OH, senior
UCA signed a large class this spring, with some players that will compete on the new beach volleyball team. But Sharp will be the lone senior on the squad in ’16. At 6-foot-1, she brings height to the outside and is the leading returner in service aces. Sharp is an all-around player who hit .165 last year and contributed significantly with both blocks and digs.

Savannah Shelton, Philander Smith, DS, freshman
The future could be now for Shelton, who comes to Philander Smith from just down the road in Bryant. It’s a young roster and the freshman has a chance to hit the court right off the bat, as she can serve, set and plays solid on defense as well.

Kya Standford, Arkansas-Monticello, MH, senior
Standford played in only 99 sets last year, but recorded 82 total blocks. She also led the Cotton Blossoms with a hitting percentage of .209, fifth all-time for the program. Standford seemed to get stronger as the season went along and scored double figures in points in six of the last 11 games. Her presence in the middle will be important for UAM this year.

Madisson Williams, Lyon, L, sophomore
Williams averaged 3.4 digs per set as a freshman and had 22 aces while not afraid to be aggressive on the serve. A member of a big freshman class in 2015, Williams and the Scots had the most wins (17) for the program since 2008 and the Scots look to poised to build on that in 2016.