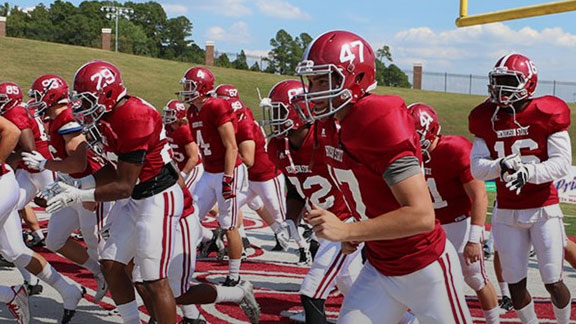 There looks to be a lot of great college football to watch this season within the state lines of the Natural State. Here’s a list of those you should check out.

Thursday, Sept. 1
Houston Baptist at Central Arkansas
Opening weekend provides a conference game right off the bat in the Southland. It will also be broadcast on the American Sports Network, but if you’re in the Conway area, it looks to be a great time to get to a game and break in the season, and one night before most high school football in the state gets underway.

Saturday, Sept. 3
Oklahoma Baptist at Harding
This one was a lot closer than most expected last year in Shawnee as OBU played its first game in D-II. (HU won 20-19 in overtime after a missed OBU extra point.) But the Bisons, and Bison for that matter, are in Searcy for this year’s opener where Harding has won its last three home openers by a combined total of 153-6.

Saturday, Sept. 10
Hendrix at Lyon
The Scots didn’t win a game in their first football campaign last season, and that includes a 42-7 loss at Hendrix. But Lyon has a year now under its football belt and this is a game that could develop into an in-state rivalry with time.

Saturday, Sept. 17
Southwestern Oklahoma at Ouachita
Southwestern stopped the Tigers’ 13-game regular season winning streak in Weatherford last year. But the Dawgs to Arkadelphia this season where a strong offense should be waiting for them.

Saturday, Sept. 24
Central Arkansas at Arkansas State
The teams combined for 16 wins in 2015 and this will be first time the two teams have squared off in five years and 25th time overall. It will be the final non-conference game for the Red Wolves before trying to extend a nine-game Sun Belt wining streak.

Saturday, Oct. 1
Henderson State at Arkansas Tech
The all-time series is pretty tight with Tech holding a 43-41-4 lead. The Reddies handed the Wonder Boys their first loss of the season, but the ATU defense did a solid job holding HSU to just 17 points, the lowest total in GAC play.

Saturday, Oct. 8
Arkansas Tech at Ouachita
Three of the four games Ouachita lost in 2015 were away from Cliff Harris Stadium. The Tigers get another chance to host one of the teams to pull off one of those wins as the Golden Boys head to Arkadelphia in October.

Saturday, Oct. 15
Berry at Henrix
The Warriors took only one loss last season in conference play and that was on the road at Berry. Hendrix will get to host this one at Crafton-Faulkner Field and a win in this one could go a long way toward winning the SAA again.

Ole Miss at Arkansas
Anyone remember last year’s game? 4th and 25. Overtime. Lateral. Two-point conversion. Henry. Collins. Allen. Six touchdown passes. The sequel may not be as exciting as all that. Or will it?

Saturday, Oct. 22
Henderson State vs. Southern Arkansas (Murphy USA Classic at El Dorado)
These two teams faced each other in this Classic, now in its eighth edition in 2016, two years ago with HSU winning 55-41. Oddly enough, it means the Reddies will have now gone without playing in Magnolia since 2012.

Saturday, Oct. 29
East Central at Arkansas-Monticello
The Boll Weevils scored 15 unanswered points and missed a 50-plus yard field goal attempt in the closing seconds as they came up three points short for the second consecutive weekend on the road. UAM will get the Tigers in Monticello this year.

Southeastern at Southern Arkansas
The 35-13 loss in Durant last year to the Storm was an aberration of late as this matchup is has become a one-possession game in recent years, and regularly comes down to the final minute – and even final play. The Muleriders tied the last game between the two in Magnolia on a touchdown pass on the last play of the game and the PAT won it, 30-29.

Saturday, Nov. 5
Mississippi Valley State at Arkansas-Pine Bluff
Both of the Lions’ wins in 2015 came in overtime. UAPB held off MVSU in the final game of the season last year, 25-19, and this year’s game is at Golden Lion Stadium.

Saturday, Nov. 12
New Mexico State at Arkansas State
The Red Wolves have six home games, but this one is the final one and the final three are on the road. NMSU may be an easy game for Senior Day, but it is also Heroes Day and a great time to recognize our military and celebrate the soldiers.

Henderson State at Ouachita
The Battle of the Ravine. The Shortest Road Trip in College Football. HSU leads the series 43-40-6.
Enough said.

Saturday, Nov. 19
Prairie View A&M at Arkansas-Pine Bluff
It’s the final regular season college football game in the state in 2016. And the Marching Storm and the M4 will be performing. A great way to close out the year.