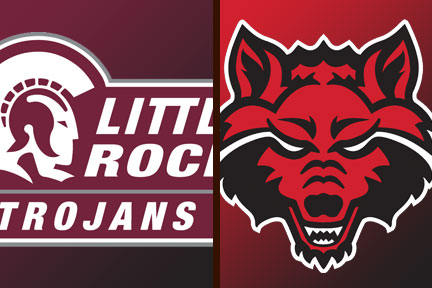 JONESBORO – The Arkansas State volleyball team topped Little Rock 3-0 (25-11, 25-19, 25-20) Monday night at the Convocation Center for its sixth straight sweep, which is the most since a seven-match streak of sweeps in 1996.

Mallory Warrington handed out 42 assists and fell just one dig shy of a double-double with nine that tied for the match high with teammates Markie Schaedig and Fields. Kelsey Reis added seven kills on a .600 attacking percentage and led the team with two aces. Reis, Uke, and Warrington each had a block apiece.

“I loved the team effort and thought we came out ready to go because you don’t have to talk much to get ready for Little Rock,” A-State head volleyball coach David Rehr said. “There’s no love lost between us, but we also respect each other. We got a sweep and that’s what you want, but it got a little uglier at the end than we wanted it to.”

A-State raced out to a 9-3 advantage in set two after a kill by Warrington to force a Little Rock timeout. The timeout did little to slow down the home team as the lead was stretched to 20-10 before a 7-4 run by the Trojans put the tally at 24-17. The visitors won two straight points after a timeout to get within 24-19, but a kill by May gave A-State a 25-19 set win.

The third set began with the Trojans claiming an early 6-3 edge, but a 4-0 run by A-State, capped by a Uke kill, put the home team on top 7-6 and forced a Little Rock timeout. The set remained competitive until Shelby Holmes gave A-State a 20-16 lead on a kill. Little Rock got within three points once at 21-18, but never got any closer as Arkansas State was able to earn a 25-20 win for the sweep.

Arkansas State hits the road to play Georgia Southern in its next contest on Friday, Oct. 28. First serve from Hanner Fieldhouse in Statesboro is set for 5:30 p.m. (CT) and the match is scheduled to be broadcast on ESPN3.