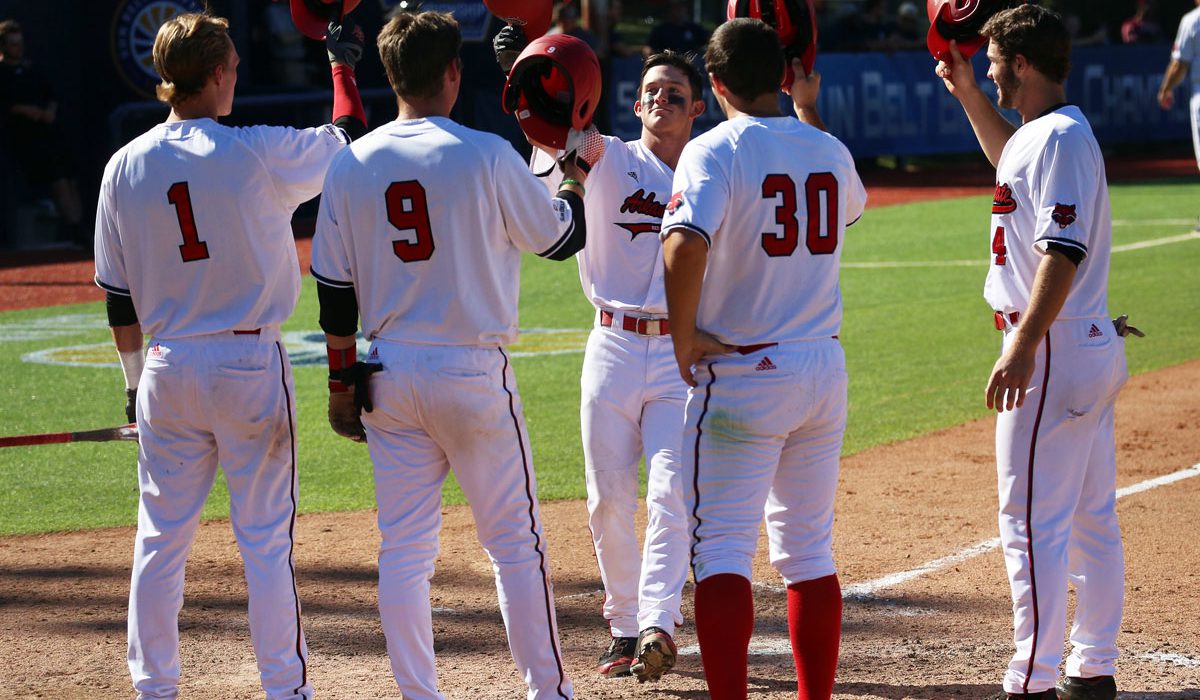 STATESBORO, Ga. – The Arkansas State baseball team took an early lead and scored 11 runs in the bottom of the fifth inning to break the game open in a 21-4 run-rule victory in seven innings over Georgia State in the first round of the Sun Belt Conference Tournament Thursday afternoon at J.I. Clements Stadium in Statesboro, Ga.

The 21 runs are the second most by the Red Wolves since a 27-7 win over Murray State on March 11, 2014, while it’s also the second most runs scored in a SBC Tournament game in league history. The 11 runs in one inning tie for the most since an 11-run inning, also the bottom of the fifth, in a 19-12 A-State victory over SIUE on Feb. 27, 2009, which was head coach Tommy Raffo’s first season.

Arkansas State improves to 27-26 with the win and advances to play second-seeded UT Arlington Friday at 11:30 a.m. Georgia State’s season ends with a 22-33 record.

The Panthers trailed 8-1 in the top of the fifth but scored a pair of runs on bases-loaded walks before a double play plated another to cut the A-State lead to 8-4. However, the Red Wolves exploded for 11 runs in the bottom of the fifth by virtue of six walks, three hits, one hit-by-pitch, and an error.

The first run of the frame scored on an error by GSU shortstop Justin Jones, while three more runs scored on bases-loaded walks in the inning. Joe Schrimpf delivered a two-run single, while Alex Howard added a RBI single to account for seven of the runs. The biggest hit of the inning came with two outs when Drew Tipton smacked a grand slam, A-State’s first of the season, for the final four runs of the inning to make it 19-4.

Jeremy Brown singled home two more runs to put A-State ahead 21-4 to set the final. Tyler Zuber improved to 5-1 on the year after tossing 1.1 scoreless innings in relief of Bradey Welsh, who lasted four-plus innings and allowed four runs on three hits with three walks and five strikeouts. Hunter Gaddis took the loss for the Panthers after allowing eight runs (five earned) on five hits. GSU used seven pitchers in the contest.

Tipton went 2-for-2 with a career-high five RBI, while Howard knocked in four RBI to tie his career high. Schrimpf knocked in two runs, and Garrett Rucker scored four runs with two RBI. The Red Wolves out hit Georgia State 10-4, but also walked nine times and were hit by five pitches.

A-State was able to score first when two runs scored in the bottom of the second with two outs on a dropped pop up by Jones at shortstop. The Red Wolves added another on a RBI double by Tipton to take a 3-0 edge. However, the Panthers were able to strike back with a sacrifice fly off the bat of Jones to make the score 3-1 in the top of the third.

Howard gave A-State a 6-1 lead in the bottom of the third with a three-run long ball, his fourth of the season, before a pair of RBI doubles by Rucker and Schrimpf pushed the Red Wolves’ advantage to 8-1.

All of the games of the Sun Belt Conference Tournament, which is now a single-elimination event throughout are being broadcast on ESPN3.