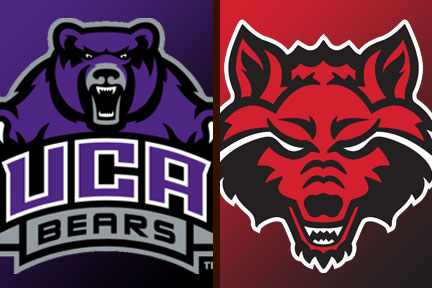 Kenzie Fields led the Red Wolves (5-3) with 13 kills and had 10 digs to register her second double-double of the season. Anna Murphy tallied 12 kills on a .364 attacking percentage, while Brentlee Weaver had nine on a .318 hitting percentage. Mallory Warrington handed out 39 assists, while Lindsay Cline (12) and Markie Schaedig (11) each had double-digit digs. Nicole Knight, Cline, and Fields had two service aces apiece.

“We’re not in a great place yet as a team,” A-State head volleyball coach David Rehr said. “We’re still working through some lineups and other changes, but today was one great step in the right direction. There’s nothing like playing at home in the Convocation Center. The crowd was with us, the band was amazing, so playing these next three at home is crucial for us.”

A-State raced out to a 10-6 lead on Central Arkansas (3-5) after a Weaver kill in set one and led 16-12 after a Carlisa May kill to force a UCA timeout. The Sugar Bears also called another timeout down 24-19 and the Red Wolves won the next point on a Murphy kill for a 25-19 set win.

The third set began evenly with the score tied 9-9, but a 5-0 Arkansas State run put the score at 14-9. The Sugar Bears never really threatened the rest of the set as the Red Wolves closed out a 25-17 set win and 3-0 match victory with a kill from Shelby Holmes.

“It’s good being back home,” Fields said. “I thought I played smart and didn’t overthink. I just enjoyed it, the atmosphere, and my teammates.”

Arkansas State returns to action Friday night in its second game of the A-State Invitational with a matchup against UT Martin. First serve from the Convocation Center is set for 6 p.m. for that matchup. UT Martin plays Tulsa at 10:30 a.m. to open Friday’s action, while Central Arkansas and Tulsa play at 3:30 p.m. prior to A-State’s home matchup.