Arizona Christian offense too much for Lyon 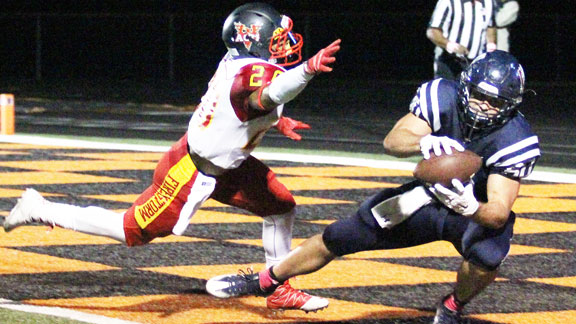 Lyon (3-5, 2-2 CSFL) once again put two backs over 100 yards rushing, as senior Michael Bowles ran for 150 yards on 20 carries to go over the 1,000-yard mark for the second consecutive season. He now has 1,065 yards and is averaging 133.1-yards per game and 7.1-yards per play with three games left in 2016. Quarterback Dwane Robinson added 106 yards and a score on 23 attempts, but left the game in the fourth quarter with a knee injury. His status will be evaluated in the first part of the week. He also completed 10-of-21 passes for 122 yards and a score.

This was the fourth time this season that at least two Lyon backs crossed the 100-yard rushing barrier, but the Scots dropped back into a fourth-place tie in the CSFL standings with two conference games remaining.

“I think you’re starting to see more of our offense now,” said Lyon head coach Kyle Phelps. “You’re seeing what happens when teams bring eight or nine guys in the box, because we’ve got some receivers who can make some plays and we’ll make them pay for that. That’s what we have to do; we have to run the football, but when they start stacking the box we’re going to have to hit (receivers) deep.”

Lyon was run-heavy again this week, rushing for 279 yards and adding 171 through the air. The Scots rolled up 124 yards on the ground in the first half and added 155 in the second half. Arizona Christian tallied 361 yards in the first half and then added 321 more in the second half, as the Firestorm fell behind 10-6 with 12:57 left in the third quarter, but outscored Lyon 28-7 over the final 25:28 of the game.

“We’ve been involved in some big games this season and some tight ones and this one was no different,” said Phelps. “I thought tonight we were battling and battling and it just kind of got away from us in the end.”

It was the Firestorm offense that kept answering the bell every time the Scots put the ball in the endzone. Damario Fair led three Arizona Christian runners with over 100 yards in the game, finishing with 139 yards and a score on only six attempts. Quinta Thomas posted 111 yards and a touchdown on 13 carries, while Justin Carroll picked up 101 yards and a TD.

Veteran ACU quarterback Gerrit Groenewold was tough to contain, completing 20-of-30 passes (66.7%) for 283 yards, two touchdowns and a pick. Donovan Smith pulled in five passes for 50 yards, while Johnathon Parks caught four for 71 yards and a score.

The Firestorm, which was receiving votes this week for the NAIA Football Coaches’ Top 25 Poll, used the big play to take a 6-3 lead at the half and scored 21 points in the third quarter as it inched away in the second half. ACU had scoring runs of 95 and 85 yards in the game, to go along with a 64-yard scoring pass.

Penalties were also a big factor in the game. The Firestorm was flagged 18 times for 171 yards, while Lyon received 10 penalties for 123 yards.

“I’ve never seen that many penalties,” Phelps explained. “It’s not like we changed the way we coached or played this week. It just seemed like when we got a big play on offense or make a stand on defense we’d get a flag.

“It was a good game, with both tams going back and forth trading blows. Then the penalties started rolling up and it changed the momentum of both teams. It gave them some momentum sometimes and took some away from us. I was disappointed in the number of flags.”

Lyon fell being 6-0 with 8:35 left in the opening period when Carroll broke loose on a 95-yard scoring jaunt down the left sideline. The try for two failed.

Osvaldo Espericueta nailed a 28-yard field goal at the end of a nine-play, 52-yard drive in the second quarter to pull the Scots to within 6-3 with 4:16 left before intermission.

The Scots took their first lead with 12:57 showing on the clock in the third quarter. After driving 82 yards in six plays, Robinson connected with Hendrix in the right corner of the endzone. Espericueta’s point after gave Lyon its only lead, 10-6.

The lead didn’t last long. Groenewold hit Johnathon Parks for a 64-yard touchdown to put the Firestorm up for good, 13-10. Fair added an 85-yard scoring run on the Firestorm’s next scoring drive and suddenly with 8:01 still left in the third, ACU built a 20-10 lead.

ACU added another touchdown with 3:51 left in the third quarter to pad the lead to 27-10, before Robinson scored for Lyon at the end of an 11-play, 75-yard drive. The run was five yards, but it wasn’t enough for Lyon.

OTHER ACTION AROUND THE CSFL

WHAT’S UP NEXT FOR LYON

The Scots will finish the 2016 season with three straight road contests. Lyon will be in Plainview, Texas, next Saturday, taking on Wayland Baptist at 2 p.m. The Scots will then travel to Langston (Okla.) University on November 5 and Missouri Baptist University for a non-conference tilt on Nov. 12.