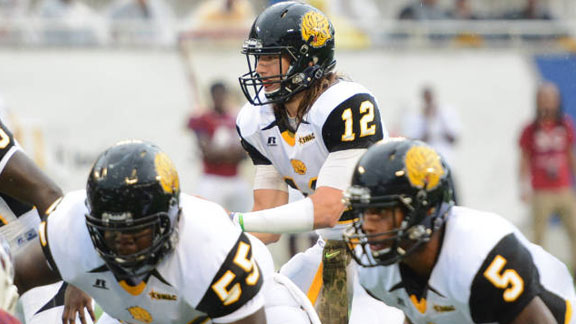 From the SWAC
Marq Mitcham

Arkansas-Pine Bluff is counting on a host of newcomers to contribute as it seeks to escape the Southwestern Athletic Conference’s Western Division basement.

With only 12 returning starters (6 offense, 4 defense, 2 specialists), the Golden Lions are the league’s least experienced team.

Entering his 10th season, coach Monte Coleman is the SWAC’s longest-tenured head coach. Coleman is working to right the ship as UAPB has struggled to a 7-27 mark since winning the conference championship in 2012.

First-year offensive coordinator Ted White has implemented the spread in an effort to boost a stagnant offense which ranked ninth in the SWAC in scoring (19.5 points per game), eighth in rushing (130.4 ypg), seventh in passing (186.6 ypg), eighth in total offense (317 ypg) and dead last among 10 teams in third down conversions (26.5 percent).

Brandon Duncan, Marcus Terrell and Nolan Sorenson all saw significant time at quarterback last season. Duncan, who started the final four games, was the most effective of the lot. Seeing action in eight games, Duncan completed 80-of-149 passes for 1,027 yards with eight touchdowns and three interceptions.

Terrell passed for 557 yards and three TDs, but eight of his 106 passes resulted in picks. On a positive note, he was the most effective runner of the three, producing 170 yards and a touchdown in five games.

Sorenson completed just 38-of-102 passes for 479 yards in six outings with a 5-1 interceptions to touchdowns ratio.

KeShawn Williams, a hometown product from Dollarway High School, is the top returning running back. Appearing in seven games, Williams averaged 7 yards per carry while generating 301 yards and three scores.

David Adams anchors an offensive line which is looking for more push after the Golden Lions averaged just 3.6 yards per carry.

Linebacker Willie Duncan III, the Golden Lions’ lone first-team All-SWAC representative, was one of the few bright spots on the defensive side of the ball.

Coleman, who doubles as defensive coordinator, is looking for replacements for seven starters, including end Jontrel Lockett (62 tackles, 10.5 TFL, 6 sacks).

Neville product Nicholas Stroud (23 tackles, 6 TFL, 3 sacks) is a fixture up front. Like Stroud, Cam Willis is coming off of an impressive spring.

David White (39 tackles, 4 pass breakups) is the veteran of an otherwise untested secondary.

Jamie Gillan and Matthew Guth remain in charge of the kicking game. Gillan was successful on 8-of-12 field goal tries, but was only 3-of-6 from beyond the 30, while punting on 13 occasions for a 38.4-yard average. Called upon 61 times, Guth accounted for a 34.4-yard punting average.