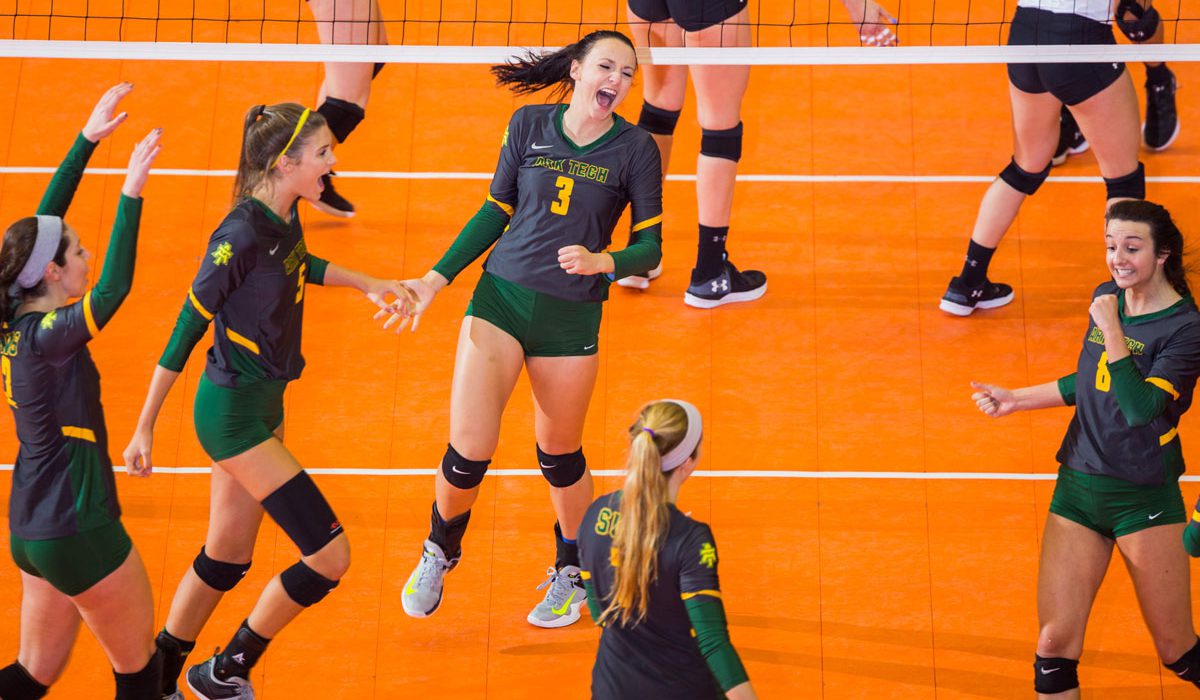 FIRST SET HIGHLIGHTS:
Trailing 11-9, Arkansas Tech ripped off 12 of the next 14 points to grab control of the set, eventually taking it by a 25-17 margin. Milnick had a role in 13 of Tech’s 14 kills and she accounted for four kills and assisted on nine others. Spray led with 5.0 points – three kills and two aces while Hunter Eshnaur added three kills and an ace. Mounts led the Lady Bisons with four kills.

SECOND SET HIGHLIGHTS:
The second set featured four ties but the Golden Suns used a 7-1 run in the middle of the set to build an 18-12 led. Harding never drew closer than three points the remainder of the set. Milnick carried her stellar play into the second set as she notched another three kills, two block assists and six assists. Arkansas Tech hit .333 and limited Harding to a .114 mark.

THIRD SET HIGHLIGHTS:
Led by Hardin and Mounts, the Lady Bisons staved off elimination with a 25-21 win in set three. After scoring only 2.5 points in the first two sets, Hardin accounted for 5.5 points. Mounts tallied seven kills and did not commit an error in the set. Heussner added 14 assists in the set. The Harding defense held Arkansas Tech to just a .107 attack percentage.

FOURTH SET HIGHLIGHTS:
The Lady Bisons evened the match, as they never trailed in a 25-20 win. They hit a match-high .333, led by Reeves and Mounts, who combined for eight kills and a .500 attack percentage. Neither committed an error in the set. With the set tied at 15, Harding won 10 of the final 15 points.

FIFTH SET HIGHLIGHTS:
Down 11-9, the Golden Suns scored the final six points to finally finish off the Lady Bisons. Johnston accounted for 4.5 points in the set with a pair of kills, a solo block and three block assists, including a block on match point. The set featured six ties and four lead changes, as many lead changes as any of the four prior sets.

WHAT’S NEXT:
Arkansas Tech earns the automatic bid to the NCAA Tournament; selection show streams at 6:30 p.m. on Monday on NCAA.com.