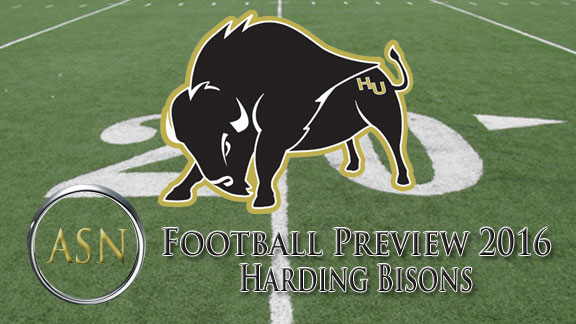 The Bisons won seven games in 2015. Not bad, but it followed three consecutive nine-win seasons, which each included postseason play. However, the Bisons bring back seven of the top eight rushers from last season to an offense predicated upon the run and have a schedule with six home games that fall favorably for them.

Park Parish will lead the charge in the triple option once again in his senior year. Parish was a First Team All-GAC quarterback, who led the team in rushing yards and was third in rushing touchdowns in ’15. Senior Michael Latu (6.1 yards per carry), an All-Super Region 3 player, and junior Zach Shelley (10.0 yards per carry) were second and third is rushing yards last year, respectively. The passing game is used sparingly, but junior Andrew Dather hauled in 45 percent of the completed passes last year. Harding graduated only two starters from last year’s offensive line, which gave up only six sacks, and juniors Michael Gragg and Gavin De Los Santos are key returners.

Tristan Parsley handled kicking and punting duties and the junior, while 6-for-14 on field goals, was successful on his final three attempts and made 53-of-55 PATs. Shelley, along with senior Corey Bassett, shared the kick return responsibilities.

Put simply – the triple option is a difficult offense to plan for, especially with usually just a few days to do it. Add to that the fact that Harding has the right players in place to run it and the Bisons run it well. HU has put up 52 rushing touchdowns for three straight seasons. Looking back to look ahead – three of the four losses in 2015 were on the road, in three of the four Harding had fourth quarter leads, and all the losses were by an average of 5.3 points – basically one score. All are strong motivational points for a team that is poised to win at least nine games again in 2016.