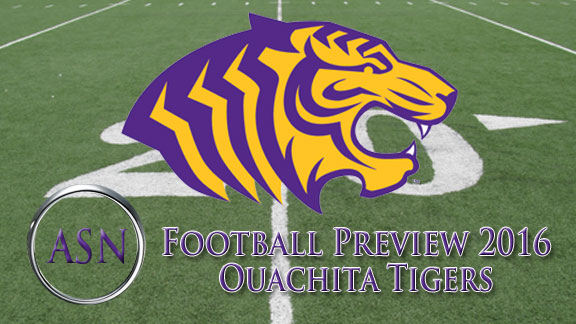 It’s been to fun to be a Tiger fan lately. Ouachita has put together winning seasons for eight consecutive years, winning an average of seven games per year. The 7-4 record last year, however, was a bit of a drop off following a 10-win GAC championship season the year before, which included a trip to the D-II playoffs. But the Tigers have a strong returning cast and although there are only five home games in 2016, the schedule falls favorably for them and the Battle of the Ravine on the road this year entails just a trip across the street.

Austin Warford stepped into the starting role last year as a sophomore and put up nearly 2,400 yards of total offense. Back now as a junior, he has the luxury of another young star in the backfield. Sophomore Kris Oliver was named First Team All-GAC in 2015 as he rushed for 1,176 yards and 19 touchdowns. The third member of this group of triplets is senior Ke’Vontae Pope, a versatile player who was also the team leader in receptions and receiving yards. All-conference honorable mention guard Jed Beach and fellow senior guard Brannon Kotch as well as sophomore Cameron Alexander return to the offensive line.

Seniors Andrew Gendi, the nose guard, and Waymon Johnson Jr., defensive tackle, return to anchor the line. There will be new starters across the board at linebacker, likely led by senior Divanuel Flores. The secondary is loaded, bringing back All-GAC honorable mention junior Shaquille Hunter, senior Devin Price and junior Alex Myres, who led the team in tackles in 2015.

Junior punter Shelton Wooley and sophomore kicker Cole Antley were recognized with honorable mention as all-conference performers last year. Wooley averaged 39.96 yards per punt while Antley made 12-of-14 field goals and 44-of-45 PATs. Pope was also on the Second Team All-GAC as a kick returner and had one brought back for a touchdown.

It has been a solid decade for the Tigers and should not change in 2016. Picking up wins away from home will be big and the offense will need to continue to produce at a high pace in the second half of the season. A strong September could propel Ouachita into a solid October. And new starters on defense will need to come into their own early and not later. The Tigers will likely once again head into November with the possibility of playing beyond the regular season.