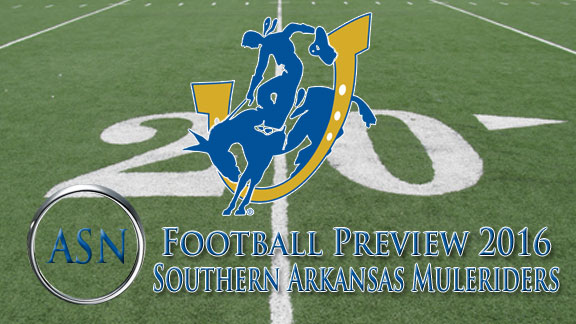 To describe 2015 as an up and down season would be accurate – two wins, two losses, three wins, two losses, two wins. Still, the Muleriders collected seven wins on the year and the third winning season in four years and were tied for fourth in the Great American Conference. SAU won the games it was supposed to win, but unfortunately fell to the nationally ranked teams (or teams receiving votes in the D-II poll) in those contests, even in heartbreaking fashion in a 29-28 loss at No. 14 Henderson State.

The offense was big for the Muleriders last season, scoring 35.5 points per game, which was third in the GAC, and leading the conference by racking up 471.3 yards per game. After a stellar freshman season, in which he was named GAC Freshman of the Year and First Team All-GAC, Barrett Renner will be back to lead the offense. His two most often found targets in Tanner Hudson, a second team All-GAC wide receiver-turned-tight end who led the team in receiving yards and receiving touchdowns, and Jonathan Weisheit, honorable mention All-GAC who led the team in receptions, are back as juniors. Another junior, Michael Nunnery was the team’s leading rusher in last year’s pass-dominated offense.

Renner wasn’t the only fantastic freshman on the roster in 2015. Davondrick Lison earned honorable mention All-GAC with a season that included 9.0 sacks, 17.5 tackles-for-loss and a D-II high seven forced fumbles, and returns this year to the SAU defensive line. Dominic Kelly, a senior, should be a force again at linebacker. And the team’s two leading tacklers from last season in Elgin Moore (93 tackles, four interceptions) and Q’Niko Thomas (78 tackles, one interception) headline the defensive backfield.

Bradford Grems was called upon for field goals only five times in 2015, and made three of them. He was also 47-of-54 in PAT duty. Weisheit had a punt returned for a touchdown as one of his 29 returns last year and Sidney Moore could be returning kicks again in his junior year.

With the breakout season from Renner as a freshman, it’s reasonable to think that the Muleriders were a little ahead of schedule. But with so many key components to the success of 2015 back for another go-round, there won’t be any surprise in the GAC about what the team from Magnolia can do. The task of breaking through into the upper echelon on the league is what lies ahead for Coach Keopple and his team. SAU should put together another winning season and will need to win a game or two that they “aren’t supposed to” in order to move into play beyond the regular season.