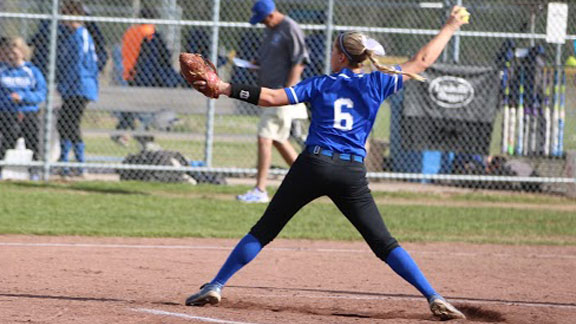 The Lady Bulldogs then won three straight in the regional tournament.

But the girls may have saved their best for last.

Bald Knob outscored its opponents 31-0 through four games in the Class 3A state tournament to win its third consecutive softball state championship.

The Bulldogs finished 36-0 and were ranked No. 2 in the country according to the USA Today Super 25 Rankings.

Coach Todd Finley, in his first year with the school, said he hadn’t noticed until after the title game that his team had put together four straight shutouts.

“That wasn’t my focus,” Finley said. “My focus isn’t how many runs we gave up or anything else, my focus is what is our strategy to win the next game.”

Finley, in his first season at the helm at Bald Knob, said his team had some anxiety about the first round game because it was playing Smackover on its home field. But he said that if the girls could come out and play a really strong game in the first round and settle themselves down and they could get some momentum.

“They were a quality opponent and had a good season,” Finley said. “They were their conference champion and got upset in the regional tournament.

“But as we progressed through the first part of the game, I felt like we were in really good shape. We scored a couple of runs early in the first three innings and we kind of exploded near the end of the ball game and got the mercy rule on them.”

Bald Knob dispatched Smackover, 10-0, advancing to take on Booneville. The Bearcats had Ashdon Ross in the circle, a left-handed pitcher that Finley spoke of as a very special player.

“We just came into it with the attitude that we were going to take her strength,” Finley said. “She likes to pitch the ball to the outside. So we just crowded the plate and started attacking the outside.

“And when she started bringing it back in toward us, because it wasn’t working away, we were able to do the same thing.

“And that was kind of when I felt like we were in control.”

“(Genoa) Coach Freeman one of my best friends so that was kind of bittersweet anyway, ” Finley said.

“But I felt like – and I’m not going to say we were overconfident going into the game – if we played our game there was no chance that they were going to be able to compete with us.

“And we played a really, really good game.”

The title game was a rematch – four times over. Bald Knob was to face Rose Bud for the fifth time in 45 days.

“In the finals, it was experience and you know, the fact that this group of kids had been there before. And they weren’t as big-eyed as maybe Rose Bud was.

“I felt like when we scored early, after that first run in the first inning, I never felt like we were in a situation where we were not in control of the game.”

That first run in the first inning, was all that either team would score.

Senior Autumn Humes, who was in the circle for the Lady Bulldogs all four games, crossed the plate to provide her own run support.

Humes reached base on a single and was driven in later by sophomore Hanna Smith for what would prove to the game-winner, and Bald Knob took the championship, 1-0.

Humes also struck out 12 for the win and was named the Tournament MVP.

“Even when they had runners on third base with one out, I never felt like we were not in control of our own destiny there,” Finley said.

“There was a different level of intensity about the game. And I felt like it was one of those deals that as long as we got the last at-bat that we would be in really good shape, because of the fact that we had played them so many times before this year.

“And as long as we got the last at-bat, we were really comfortable with however it was that we were playing.”

For the year, Bald Knob allowed only 23 runs in 36 games, and only nine were earned. The combined ERA of the team pitching was 0.34.

“It’s pretty amazing to think, when you sit down and look at the numbers to see really how dominant we were with the teams that we played.

“It just goes to show you what our schedule was like.”

Finley said that even after the season, the accomplishment was still something that was a lot to comprehend.

“I was at the sophomore-junior classic and some of my coaching buddies were talking about, Oh, you’re 36-0. You’re 36-0.’

“But I didn’t set the schedule to be 36-0. It’s just one of those deals where it’s a once-in-a-lifetime season.”