Bears down Lumberjacks, improve to 8-1 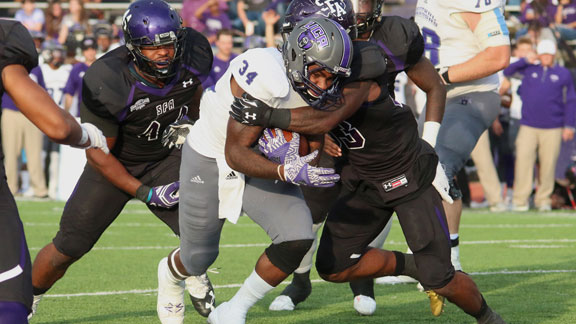 The Bears, who improved to 8-1 overall and 7-0 in the SLC, had five turnovers in the second half but had staked themselves to a 24-14 lead at that point. UCA turned the ball over on its first offensive play of the game, a fumble at its own 9. UCA also threw a pair of interceptions in the end zone and lost another fumble at the SFA 2.

“It wasn’t pretty, and we’ve said that before,’ said UCA head coach Steve Campbell, who has his Bears in a first-place tie with No. 1 Sam Houston State with two games to play. “But we’ll take it. I don’t know how many turnovers and penalties we had. But then you go on the road and beat a good football team by 20 at their homecoming…

“That’s what I told the guys, we have a chance to be very, very good. But we can’t play like this and be as good as we want to. We didn’t protect the football. We had way too many penalties. We’ve done this twice now this year, once against Samfordand then today.’

Samford handed the Bears their only loss of the season on Sept. 10 in Conway in a game where UCA had three costly turnovers.

The Bears managed to take a 24-14 halftime lead after a sluggish first 30 minutes. Junior quarterback Hayden Hildebrand completed 13 of 17 passes for 168 yards and a pair of touchdowns in the half. After SFA took a 7-0 lead following a UCA fumble on its first possession. Quarterback Zach Conque went in from eight yards out for the score after the Lumberjacks took over on the UCA 9.

UCA answered when Hildebrand connected from 30 yards out with senior tight end Cody Dauksch. Matt Cummins’ PAT tied it at 7-7 with 5:42 left in the first quarter. Hildebrand then found a wide open Desmond Smith behind the SFA secondary for a 57-yard scoring pass and a 14-7 lead at the 2:11 mark of the quarter.

Conque found the end zone again for SFA to tie it at 14-14 on the opening play of the second quarter but UCA scored the final 10 points of the half, despite some key penalties and a brief injury to Hildebrand. Freshman running back Carlos Blackman had a 1-yard touchdown run and Cummins added a 31-yard field goal with just 21 seconds left for the 24-14 advantage at the break.

The Bears could not get out of their own way in the second half with five more turnovers and six more penalties. Hildebrand, who was 13 of 17 for 168 yards and two touchdowns in the first half, finished 21 of 33 for 312 yards with two touchdowns and a career-high three interceptions.

UCA took advantage of one of SFA’s three turnovers when senior safety Brandon Porter intercepted Conque’s pass at the 26 and returned it to the 18 early in the fourth quarter. A personal foul penalty on the ‘Jacks moved it to the 9 and on the second play, senior running back Antwon Wells went in from the 1 for the touchdown and a 31-14 lead with 10:20 to play.

Cummins addded a 22-yard field goal with 3:53 left to set the final.

The Bears rolled up 502 yards of total offense and held the Lumberjacks to 321. UCA’s run defense, leading the FCS, allowed just 59 yards on 31 attempts. Junior defensive end Cardell Best recorded 3.0 tackles for loss and 1.5 sacks. Senior linebacker Garrett Sharp had a team-high 8 tackles, including a sack and 1.5 tackles for loss, along with a forced fumble.

Blackman, a freshman from Gosnell, led the UCA ground game with 83 yards on 18 carries. Smith, a senior from Bentonville, had 9 catches for 116 yards to lead the UCA receiving corps. In the past two matchups against SFA, Smith has 23 catches for 298 yards.

“I’m very, very happy that we won the football game, and I’m proud for our guys,’ Campbell said. “It’s exciting to be 7-0 and all that. But we have to know that we have to finish some of those drives, we can’t turn the football over. Our very first play of the game, we turned it over, and then it was a comedy of errors.

“Again, I don’t want to be negative, we won by 20. But if you want to know what’s going through my mind… But we made some plays, too. Some guys ran extremely hard, we made some plays down the field. The one thing I can say about these guys is they give tremendous, tremendous effort. They play tremendously hard. We didn’t play the smartest, and I know there is going to come a time where we are going to have to play very, very smart and hard. So we got to get there.’

The next opportunity is Saturday at home on “The Stripes” when the Bears host the Nicholls Colonels in a 2:30 p.m. kickoff. UCA finishes the regular season on Nov. 19 against Sam Houston State in Huntsville, Texas.