Bears earn share of first place with romp of Demons 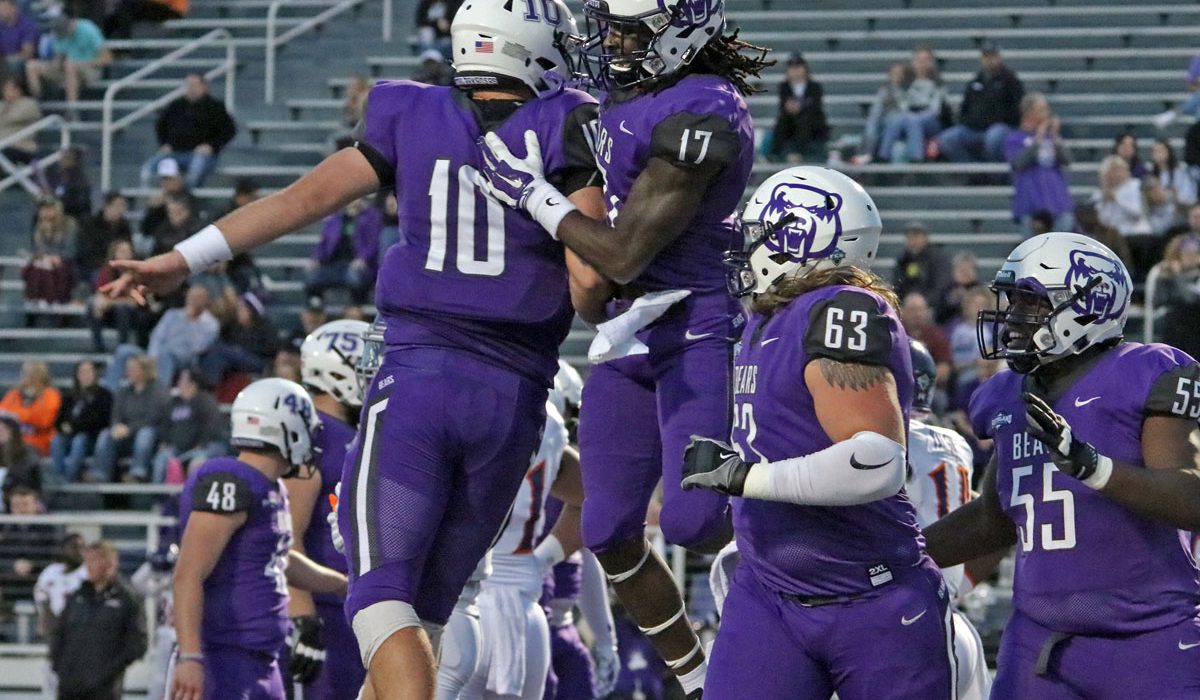 CONWAY – The 15th-ranked University of Central Arkansas Bears rolled up an even 500 yards of total offense in a convincing 38-17 victory over the Northwestern State Demons in Southland Conference action Saturday on “The Stripes” at First Security Field at Estes Stadium.

The win for the Bears (5-2, 4-1), coupled with losses by No. 6 McNeese State and No. 10 Sam Houston, moved them into a tie for first place in the SLC with Incarnate Word and McNeese, with Sam Houston dropping to 3-2. UCA has four regular-season games remaining, including next Saturday’s 6 p.m. matchup against McNeese in Lake Charles.

UCA redshirt freshman quarterback Luke Hales had his second five-touchdown passing game in his third career start, completing 12 of 28 passes for 278 yards. Hales, who inherited the starting role after injuries to Breylin Smith and Kirk Baugh, tossed a pair of touchdown passes to senior Jakari Dillard, and three more to senior Lester Wells, redshirt freshman LujuanWinningham and junior running back Carlos Blackman. He now has 11 touchdown passes in his three career games under center.

The Bears grabbed an 28-3 lead midway through the second quarter after scoring tosses of 31 and 25 yards to Dillard, 53 yards to Wells and 15 yards to Winningham. UCA, which has won three consecutive games since an overtime loss on the road at Sam Houston State, settled for a 28-10 halftime lead after putting up 325 yards of offense and holding the Demons to just 119 (27 on the ground).

UCA’s defense was strong against the run for the second straight week, holding NSU to 32 net yards on 26 rushing attempts, after limiting Stephen F. Austin to -20 yards on the ground in the previous game. UCA’s opponents are now averaging 99.1 yards per game through seven games.

NSU, which lost to UCA for the fifth consecutive time, got 187 passing yards from third-team quarterback Kaleb Fletcher, who came in for backup Clay Holgorsen, who left with injury in the first quarter. NSU starting quarterback Shelton Eppler, who has 1,679 passing yards and 14 touchdowns, missed the game with a concussion. Junior running back Jared West, the No. 4 rusher in the SLC, was held to 52 yards on 10 carries. Junior receiver Jazz Ferguson caught eight passes and matched his league-leading season average of 108 receiving yards but was kept out of the end zone.

The Demons scored on a 35-yard field goal by Austyn Fendrick in the second quarter, a 7-yard run by Fletcher in the final minute of the first half and a 53-yard pass from Fletcher to Jaylen Watson with 39 seconds left in the game.

UCA, showing its defensive depth in the second half, had 26 different players record a tackle, with five Bears tying for with a high of four. The Bears had 7.0 tackles for loss (-54 yards), with 1.5 each from sophomore Jackie Harvell and sophomore Austin Norris. Sophomore cornerback Robert Rochell claimed UCA’s only turnover with an interception at the NSU 39 on the Demons’ second possession of the game. That led to Hales’ 53-yard touchdown pass to Winningham, the first of his career and good for a 21-0 UCA lead at the 13:41 mark of the second period.

Blackman led all rushers with 84 yards and also caught his first touchdown pass of the season. The junior from Gosnell is now just 103 yards away from 2,000 career rushing yards. Sophomore running back D’erek Fernandez of Fort Smith saw his most extensive action of the season and ran for a career-high 59 yards on 11 carries (5.4 average). Dillard caught four passes for 109 yards and two scores, while Wells had three for 79.

UCA, which had 222 rushing yards on the night, held the ball for 10:52 of the fourth quarter (30:21 for the game) and converted 8 of 15 third-down opportunities for the game, compared to 2 of 14 for NSU. Senior Matt Cummins capped UCA’s time-consuming 17-play drive in the fourth quarter with a 34-yard field goal that put the Bears up 38-10.

After the McNeese game, UCA returns home to host Lamar on Nov. 3 and UIW on Nov. 10 before finishing the regular season on the road at Abilene Christian.