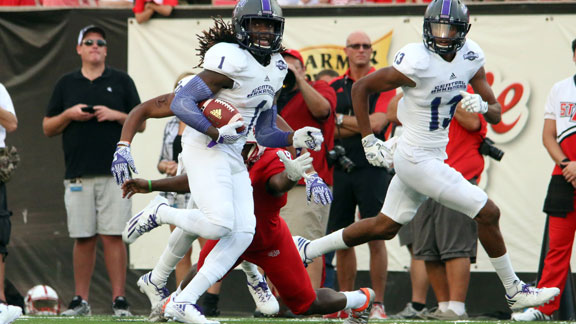 JONESBORO – The University of Central Arkansas Bears finished the job this time, knocking off the Arkansas State Red Wolves 28-23 on Saturday night in front of a crowd of 28,012 at Centennial Bank Stadium.
The Bears, who had come close to beating several Football Bowl Subdivision teams in recent years, outscored the Red Wolves 15-7 in the decisive second half, getting the game-winning touchdown on an 18-yard pass from Hayden Hildebrand to ASU transfer Brandon Cox with 6:26 remaining. UCA (3-1, 2-0) then turned to its defense to stop ASU twice in the final five minutes to seal just the program’s second victory over an FBS school since moving to the Football Championship Subdivision in 2006.
“I told them it was going to be tough,’ said a happy UCA head coach Steve Campbell on the field after the game. “Games like this are going to be tough, and you just have to keep battling and perservering. You know, bad things happen but you just keep battling and battling. And they did, and I’m so proud of them.
“And I’ve been very proud of them before when we’ve come up short. But this time we didn’t come up short. We played our butts off against Oklahoma State (last year). We played our butts off against Texas Tech (two years ago). And we played out butts off tonight. And it’s great to be proud of a team for fighting their butts off and then getting rewarded for it by winning the football game.’
UCA’s defense, ranked No. 4 in FCS against the run, allowed the Red Wolves (0-4) just 45 rushing yards on 34 attempts, intercepted two passes and recovered a pair of fumbles. One of the interceptions was by senior Tyler Williams on the UCA 9 with 4:40 remaining. The Red Wolves finished with 424 total yards of offense but managed just one score over the final three quarters. Three of ASU’s final four possessions ended in turnovers.
“Defense has played great all year,’ Campbell said. “They got us on a couple of plays, and that’s been our case. But I like our defense. When they don’t get you on a play, on a great scheme, something really, really schemed up, our guys are in good position and pretty good shape. And they did a great job of scheming and they got us on a couple of things. But I’m very, very proud of the way our defense played.’
After UCA punted back to ASU leading 28-23 with :38 remaining, the Red Wolves completed two passes down to the UCA 35. After an incomplete pass from Justice Hansen to Cameron Echols-Luper, he went to the end zone on second and 10 to Christian Booker but junior cornerback Tremon Smith positioned himself perfectly in front of him and knocked it down to end the game.
ASU took a 3-0 lead with a 33-yard field goal with 12:15 left in the first quarter. UCA answered less than four minutes later with a 47-yard punt return by Smith that gave UCA a 7-3 lead at the 8:42 mark of the period. Hansen then took the Red Wolves 48 yards in three plays, hitting Kendall Sanders with a 5-yard touchdown pass to retake the lead at 9-7 at the 8:02 mark. Hansen then connected with Warren Wand for 48 yards and another touchdown with 3:21 left in the quarter, giving ASU a 16-7 lead.
UCA got a pair of field goals from sophomore Matt Cummins in the final 1:44 of the second quarter to close the gap to 16-13 at the half. Cummins would add his third field goal, from 25 yards out, with 6:06 left in the third quarter to tie it at 16-16. ASU got a 58-yard scoring pass from Hansen to Echols-Luper less than a minute later to make it 23-16.
The Bears scored on a 3-yard run from senior Antwon Wells with 13:12 left in the game but Cummins’ PAT missed, leaving UCA with a one-point deficit. Hildebrand tossed the go-ahead touchdown to Cox, who transferred from ASU to UCA two years ago. The Bears finished with 382 yards of total offense, with Hildebrand overcoming a slow first half to complete 18 of 36 passes for 270 yards and a touchdown. Wells led the Bears’ ground attack with 47 yards and his fourth touchdown of the season.
Senior wide receiver Jatavious Wilson caught 7 passes for 130 yards. Hildebrand also had a pair of quick kick punts for an average of 47 yards for the Bears, who lost 53-24 to the Red Wolves in the last meeting in 2011.
“They did it when they had to,’ Campbell said, “against a team that has won, what, four or five Sun Belt titles in a row and been to bowl games four or five years in a row. They found a way to get it done and I’m very, very proud of those guys.’
Junior linebacker James Graves led the Bears with 12 tackles, while junior rover George Odum had 11, including three tackles for loss, and forced a pair of fumbles. Redshirt freshman Chris Terrell forced and recovered a fumble and Smith grabbed UCA’s other interception.
First-place UCA returns to Southland Conference play next Saturday on the road at Abilene Christian in Abilene, Texas.