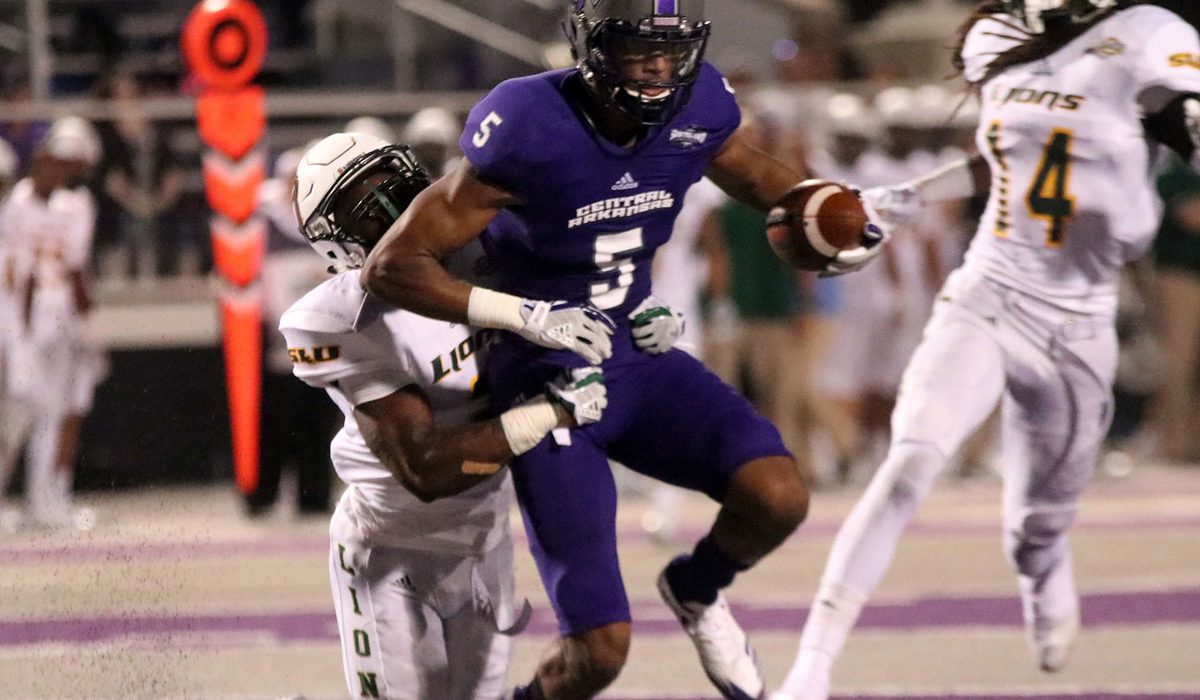 CONWAY – The No. 14/16 University of Central Arkansas Bears nearly doubled up offensively on Saturday night and cruised to a 38-6 victory over the Southeastern Louisiana Lions in their Southland Conference opener on “The Stripes” at First Security Field at Estes Stadium.
The Bears (2-1, 1-0) rolled up 473 yards of total offense while holding the Lions (0-3, 0-1) to just 279 yards, with UCA running six fewer offensive plays. The Bears, who have won their two games this season by an average of 30 points, netted 214 rushing yards and threw for another 259 yards.
UCA used a 21-point third quarter to break away from a 14-3 halftime lead and was never threatened after that. The 21-point outburst came courtesy of an 18-yard touchdown run by redshirt freshman Kierre Crossley, 15-yard pass from senior quarterback Hayden Hildebrand to senior wide receiver Roman Gordon and a 38-yard fumble return by junior linebacker Raphael Garner that made it a 35-3 UCA lead.
Crossley, from Everman, Texas, had a 2-yard touchdown run in the second quarter for his first career touchdown as a Bear. Sophomore running back Carlos Blackman started the scoring, capping a 7-play, 63-yard drive with a 7-yard touchdown run on UCA’s first possession of the game. Juwan Petit-Frere returned UCA’s ensuing kickoff 79 yards to the UCA 79 yards to the Bears’ 13 but the defense held on fourth-and-two.
The Lions would also miss two field goals, from 45 and 49 yards, and suffer the only turnover of the game, the fumble that UCA defensive end Chris Terrell forced at the 45 and Garner picked up and ran it in for the touchdown with 5:44 left in the third quarter to seal the victory. UCA also led SLU on downs twice, once in the Lions’ own end of the field.
UCA had five running backs with at least four carries, led by Crossley with 10 rushes for 81 yards. D’erek Fernandez had six carries for 33 yards, while starter Carlos Blackman had 11 for 29 yards. Hildebrand finished 13 of 20 for 259 yards and one touchdown, while Dillard caught three passes for 71 yards. Hildebrand, from Bossier City, La., jumped from seventh to fifth in career passing yards at UCA and now has 5,639 for his career.
Defensively, the Bears held the Lions to just 84 yards passing. Senior rover George Odum finished with 12 tackles, while Garner had a career-high 11 tackles, one tackle for loss and the 38-yard fumble return for his first career touchdown. UCA recorded 14 tackles for loss for -63 yards.
The Bears, picked second in the preseason SLC poll, beat the fourth-pick Lions for the third straight year, and second consecutive time by 30-plus points. UCA leads the overall series 8-3. The Bears improved to 30-6 on “The Stripes,”, which were installed for the 2011 season.
UCA has an open date next weekend before hosting nationally third-ranked Sam Houston State on Saturday, Sept. 30 in a battle of the Nos. 1-2 SLC from last season. Kickoff is set for 6 p.m.