Bears take down No. 1 Cowboys in Southland tournament 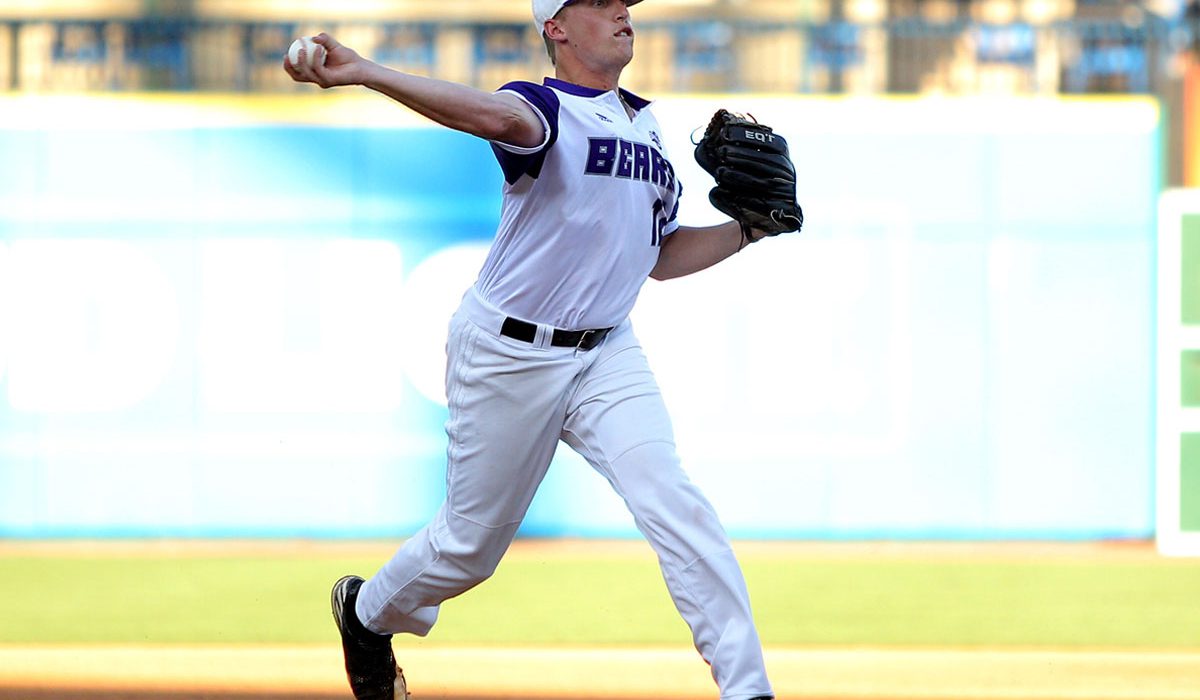 Moyer, from Russellville, controlled the No. 1 Cowboys for 5 1/3 innings before giving way to Hagerla in the sixth. The senior from Petaluma, Calif., threw one-hit ball over the final 3 1/3 innings, striking out two and allowing just one baserunner. Moyer, who improved to 7-3, struck out six and allowed just four hits and three runs

“He (Moyer) was outstanding,’ said UCA head coach Allen Gum. “And their guy (starter Peyton McLemore) was good. He was throwing well and Mark came out and matched him pitch for pitch and just threw really, really well and controlled the strike zone. Moyer went out there and gave us a chance to win.’

Moyer left with the bases loaded in the sixth and Hagerla came on and worked out of the jam and then finished it out. He retired the final 10 batters of the game to earn his second save of the season and save UCA’s bullpen for the remainder of the tournament.

“It was really Hags versus their back-end guy. That guy (Collin Kobber) is a tremendous pitcher. We had the lead late and that was the big thing, And Hags took care of it.’

The Bears (33-24) struck first in the fifth inning, finally getting to McLemore, scoring five times, all with two outs. Dusty Wright led off with a base hit and moved to second on Eddy Sanchez’ sacrifice bunt. Michael Haun drew a walk before Jansen McCurdy poked a single through the left side to score Wright with the game’s first run. Haun then scored and McCurdy advanced to second on McLemore’s balk.

Hunter Strong followed with an RBI single through the right side to bring in McCurdy for a 3-0 lead. After Rigo Aguilar singled to center and moved to second on a error on MSU’s center fielder, Justin McCarty drew a walk and a wild pitch on ball four allowed Strong to score from third. Brooks Balisterri’s infield single made it 5-0 before McNeese reliever Aidan Anderson got out of the inning.

“We just shortened our swings a little bit and tried to make some things happen that way,’ said Gum, whose team was blanked by McLemore until that point. “Tried not to do too much because he was really controlling the strike zone with the off-speed stuff. The biggest thing was we finally got him in the stretch and things kind of opened up with that. His command wasn’t quite as good. We just needed to get somebody on first base and get him in the stretch.

“That one inning we just kind of took off. And we got a couple of breaks, too. A little chop on the infield, stuff like that, and all those things matter. But the biggest thing was, we finally got runners on and got the timely hits. ‘

Moyer, who had retired nine straight batters entering the top of the sixth, loaded the bases with no outs. A sacrifice fly and RBI single cut the UCA lead to 5-2. Hagerla came on and allowed one more run _ on a Shane Selman single _ before getting out of the jam with a 5-3 lead. The Cowboys (37-19) would not get another hit the remainder of the game.

“Hey, they’re a good team, there’s no question, they weren’t just going to lay there,’ Gum said. “I just felt like it was time to give it to Hags. He’s played well in that role and he did a good job there on the back end.’

The Bears out-hit the Cowboys 9-5, with McCurdy, Aguilar, Balisterri and Wright getting two hits each. The five-run fifth inning for the Bears featured five of UCA’s hits. Moyer and Hagerla held the regular-season champion Cowboys to just five hits.

The Cowboys had swept the Bears in their three-game regular season series to begin SLC play in Conway back in March en route to their SLC title.

“We played well tonight. The first time during the year, we didn’t play well against them,’ said Gum, whose team started 1-5 in SLC play before finishing 17-13. “They are an outstanding team, 1 through 9 their lineup is very tough. They defend well and then they have some very good pitching, and then their back-end pitching is outstanding. That’s why they led the league is because of their back-end arms.’

The Bears advance to a 7 p.m. matchup on Friday with either Houston Baptist, who they beat 15-4 on Thursday, or McNeese State. The winner of that game advances to Saturday’s championship game.