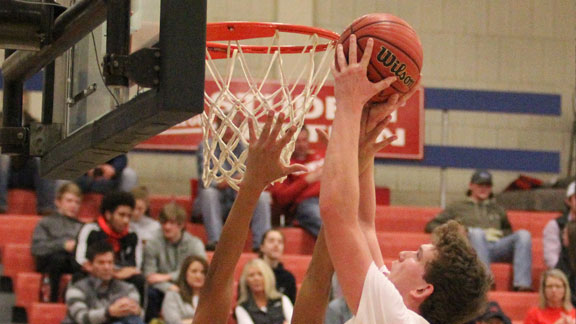 Lyon College hosted four total games on Friday with the first game being played between the Mountain View girls’ team and Southside girls’ squad. Mountain View was able to run past Southside with a 56-39 win.

The next game featured the Viola boys’ against the Highland boys’ squad where Highland ran past Viola, 39-22.

Southside controlled the tempo throughout the game against Mountain View, as they were able to pull out a decisive 63-38 victory.

The Southerners were led by Christian Reyes who poured in 15 points. Will Sitkowski added 14 points and Grant Patterson and Trystan Alcorn had 10 points apiece.

Southside advances to the championship game on Saturday at Lyon, which will be played at 8 p.m.

Cave City won the nightcap at Lyon College by a score of 63-51 over Pocahontas. The Cavemen fended off a late comeback by the Redskins to advance to the tournament championship.

Pocahontas was led by Clayton Hale’s 25 points, while Jaiden Young had eight points.

Cave City will play Southside in the tournament championship at Lyon on Saturday, at 8 p.m.

Highland held Viola to 8 points in the first half, before sprinting to a 39-22 decision over the Longhorns at Southside High School.

Preston Gurley led the Rebels with 12 points, while Tristan Hudson had eight points.

Highland advances to the consolation championship against on Saturday at Lyon. Tipoff is scheduled for 5 p.m.

Bald Knob was led by Tanner Meachum who had 16 points. Dylan Bradley had 11 points and Lucas Feagin pitched in eight points.

Izard County advances to the consolation championship against Highland on Saturday at Lyon College. Tipoff is scheduled for 5 p.m.

Mountain View defeated Southside in the first game of the day at Lyon College, 56-39. The Lady Yellow Jackets stifled the Lady Southerners, and outscored them 30-19 in the second half.

Mountain View advances to the championship game on Saturday against Pocahontas, which will be played at Lyon College at 6:30 p.m.

Pocahontas rolled to a 56-32 win over Highland in the third game of the night at Lyon College. The Lady Redskins held a 15 point lead at halftime, before pulling out the victory.

Pocahontas advances to the tournament championship game against Mountain View on Saturday at Lyon, at 6:30 p.m.

Calico Rock and Salem went down to the wire in the first game of the day at Southside High School. With the game tied at 48 and 13 seconds left, Calico Rock was able to score two of the games’ final three points to advance.

Kaylea Walling had 19 points to lead the Lady Greyhounds, while Quincy Humphries and Madison Sellars pitched in nine points each.

Calico Rock advances to the consolation championship game against Izard County, which will be play at Lyon on Saturday at 3:30 p.m.

Izard County defeated Cave City 69-52 at Southside High School, to advance to the consolation championship game. Izard County led 36-25 at halftime before rolling to the victory.

Cave City was led by Macy Jo Moody who had 20 points, while Hailey Stigall had 14. Michelle Upton also pitched in nine points.

Izard County will now face Calico Rock on Saturday in the consolation championship game at 3:30 p.m.