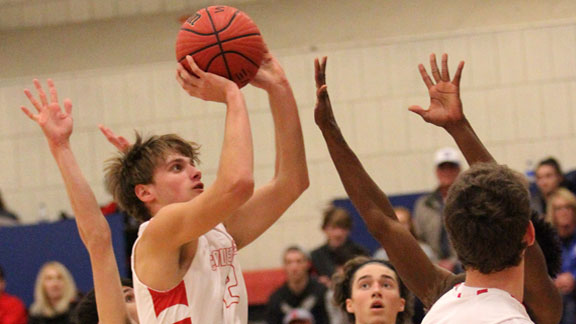 Lyon College hosted four total games on Thursday with the first game being played between the Cedar Ridge girls’ team and Calico Rock girls’ squad. Calico Rock opened the day as they rocked Cedar Ridge 54-28. The next game was between the Pocahontas girls’ squad and Salem girls’ as Pocahontas sprinted by Salem, 57-30. The third game of the night was between the Cave City boys’ team and Bald Knob boys’ team, as Cave City routed Bald Knob 61-26. In the nightcap the Highland girls’ and Cave City girls’ game, Highland defeated Cave City 59-47.

The consolation and championship tilts will be played on Saturday at Lyon College with action beginning at 3:30 p.m.

Cave City ran away easily with a 61-26 win over Bald Knob in the third game at Lyon College. The Cavemen led 29-14 at halftime before exploding for 32 points in the second half.

Bald Knob was led by seven points from Trey Finley and five points by Lucas Feagin.

Viola held on for a slim victory over Cedar Ridge at Southside High School by a score of 50-48 in the consolation round. The game was neck-and-neck throughout as Viola led by just two, 28-26 at halftime.

Viola will next play Friday at Southside High School against Highland in the consolation round at 5:15 p.m.

Preston Gurley led Highland with 15 points and Shannon Warren had 10 points. Triston Hudson chipped in nine points in the victory.

Highland advances in the consolation round and will play Viola at Southside High School on Friday at 5:15 p.m.

Izard County rolled to a decisive 64-39 victory over Calico Rock in the final game at Southside High School Thursday night. Izard County led 33-18 at halftime, before bolting ahead for the win.

Izard County advances ahead in the consolation round and will play Bald Knob on Friday at Southside High School. Tipoff is scheduled for 7:45 p.m.

The Calico Rock girls’ team got an early start and never looked back in a consolation game, as they defeated Cedar Ridge 54-28 at Lyon College. The Lady Pirates held the Lady Timberwolves to under 20 points in the first half.

Cedar Ridge was led by a 15 point performance from Ashley Dubreville. Kailee Gooch added seven points for the Lady Timberwolves.

Calico Rock will play at Southside High School on Friday at 4 p.m., against Salem.

Pocahontas was able to sprint by Salem in the second game of the night at Lyon College, 57-30. The Lady Redskins held the Lady Greyhounds to 11 points in the first half.

Pocahontas will play on Friday at Lyon College at 6:30 p.m. Salem will play Friday at Southside High School against Calico Rock at 4 p.m.

Highland defeated Cave City in a back and forth battle by a score of 59-47. Both teams battled it out the whole night, but the Lady Rebels pulled out the victory.

Kelsey Abney led the Lady Rebels with 43 points, while Alexis Moore had nine points and Katelynn Miller had seven points.