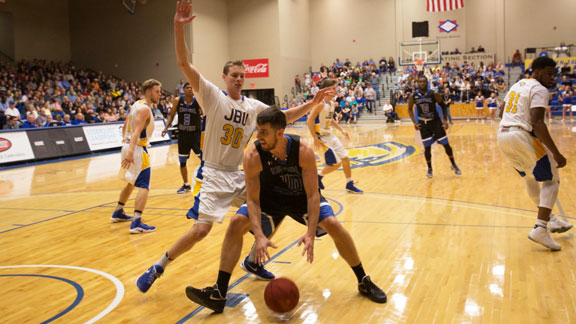 Siloam Springs – The Central Baptist College men’s basketball team opened the 2016-2017 season at John Brown University for their 36th Annual TP Game. In a close affair, JBU pulled it out 104-94 over the Mustangs.

The Mustangs started off the game a little out of sorts as they committed a couple early fouls and turnovers as JBU built an early 10-3 lead.  CBC’s Marcellous Green would score, followed by a JBU miss, a Fred Albright 3-pointer and rebound, after another Eagle miss, feeding Evans for a score to bring CBC back to just a two point deficient, 10-12.  John Brown would extend the lead into the half with a couple of 3-pointers by Jake Caudle and Ricky Roberts to make it 52-38 JBU.

JBU would maintain a double digit lead thru much of the second half until Jordan Ford(FR/Dallas, Texas)’s 3-point shot would make it 69-61.  Clay Anderson (FR/Benton, AR) would make a shot to bring the Mustangs to within six, 69-63.

A Nick Jones (FR/Little Rock, AR) made three at the 3:38 mark would bring CBC to within five points at 92-87.  It would soon become a matter of free throws as the Eagles would make them down the stretch for the final 104-94 decision.

Central Baptist had 27 points off 19 forced turnovers and would score 25 points on second chance shots.