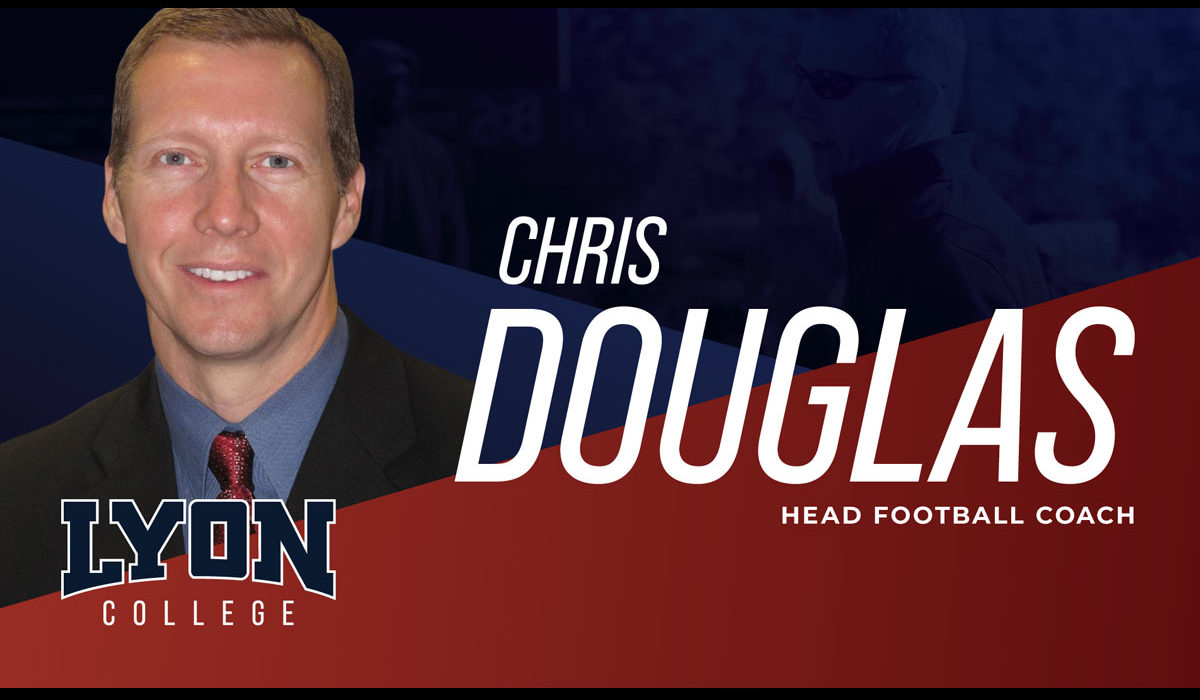 BATESVILLE – Lyon College President W. Joseph King and Director of Athletics Kevin Jenkins announced the hiring of Chris Douglas as the fourth head football coach of the Scots during the modern era.

“I am excited that Chris Douglas has agreed to become our new head football coach,” Jenkins said. “Coach Douglas has had great success as a collegiate coach and I believe he will continue to help build upon the recent success of our program. He will be a tremendous mentor and role model for our student-athletes, and will provide great leadership for our program both on and off the field.”

Douglas has extensive experience in high school and collegiate coaching, which spans over 25 years, including over 15 years as a head coach.

“I am very humbled and excited to be able to be named the next head football coach at Lyon College,” Douglas said. “From everything I have been able to see and experience, Lyon is an excellent academic institution and has a strong tradition athletically as well.  I am excited to take such a new program and see what we can do with it moving forward. I am very excited to join the Lyon family. I cannot wait to meet and work with our coaches and players!”

Douglas turned around a struggling program at MacMurray College (MC) in Jacksonville, Ill., soon after he arrived in June of 2011. From 2006-10, the program had seen only one win throughout that stretch. Douglas had 27 returners and 17 newcomers on the team entering his first season at MC. The Highlanders won two games during Douglas’ first season at the helm in 2011, which included snapping a 22-game losing streak.

Douglas coached at MC for nine seasons, which included a 34-15 mark over his last five seasons with the Highlanders. The team finished second in the Upper Midwest Athletic Conference (UMAC) standings in 2017 and 2018.

Before his return to Southwestern, Douglas coached running backs at NCAA Division II Abilene Christian University. He also coached linebackers and served as defensive coordinator for Jamestown (ND) College for one season, where the team improved from ninth in conference scoring defense to fourth. Douglas also served as the offensive coordinator at Highland Community College in Highland, Kan.

Douglas first served as a head coach at Stigler High School (Okla.). In his second season, Douglas guided Stigler to a 7-3 record as the Panthers qualified for a home playoff berth – the first in 25 years at Stigler.

Douglas began his coaching career at Southwestern College in Winfield, Kan., where he earned first-team all-conference accolades and was an NAIA All-American Scholar-Athlete. Douglas was an assistant coach at his alma mater, where he helped SWC win three consecutive Kansas Collegiate Athletic Conference (KCAC) Championships and earn three NAIA National Playoff appearances from 1997-99.

Douglas has a bachelor’s degree in biology from Southwestern College and a master’s in education from Wichita State University. Douglas and his wife Michelle have three children.