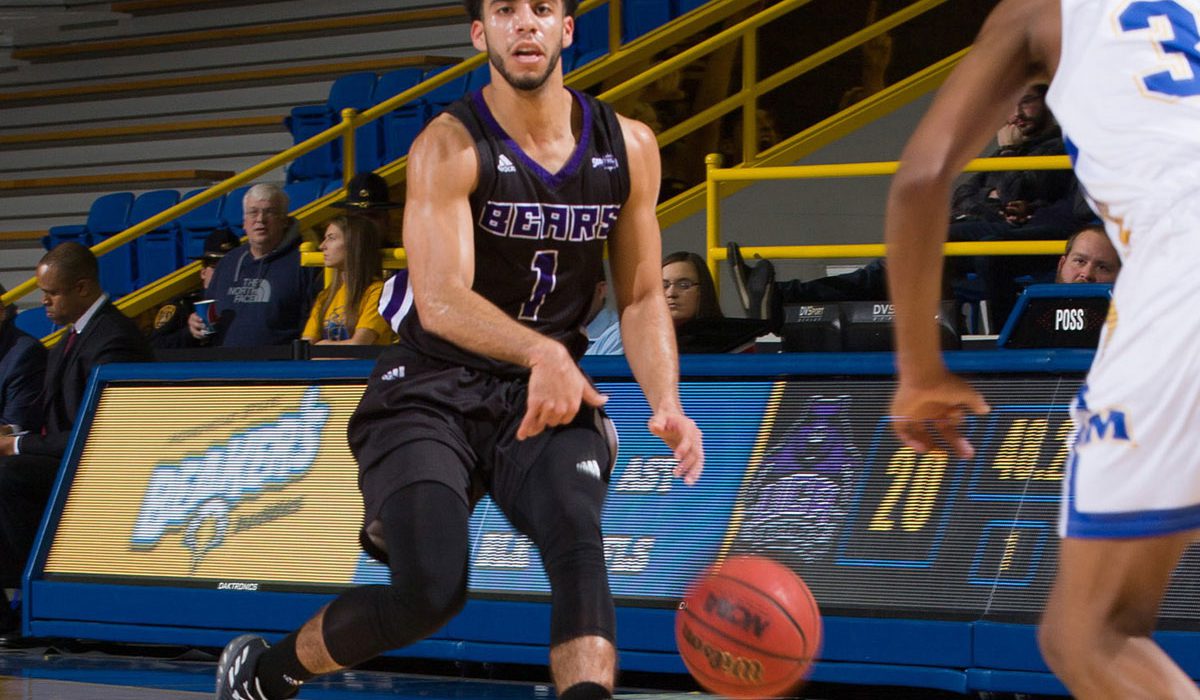 MOREHEAD, Ky. – A gutsy comeback by the University of Central Arkansas Bears was thwarted at the free-throw line by Morehead State on Saturday afternoon as the Eagles held off the Bears 98-94 in overtime at Ellis Johnson Arena.
UCA (6-6) fought back from a 21-point second-half deficit in the final 14 minutes to force overtime on a dunk by 7-foot freshman Hayden Koval with one second remaining in regulation, off a nifty inbounds pass from fellow freshman DeAndre Jones. But the Eagles, who made 19 of 23 at the free-throw line in the second half, connected eight times in nine tries in the extra period to hold off the Bears and even the season series at 1-1. UCA held off MSU 82-78 last month in Conway.
“This is one of those bittersweet games,’ said UCA head coach Russ Pennell. “If you play the entire game like you did the last 12 minutes, you probably win this game by 15. We have to learn and mature as a team to understand that it’s a 40-minute game, you’re playing sin omebody else’s house… I tried to paint this picture, the way we felt playing Little Rock the second time is exactly the way Morehead felt today. They wanted revenge. They pretty much thought they should have won the first game in Conway.
“I always believe as a coach, you have to understand your opponent. I think that’s critical. I need to think like they are thinking as a coach, and impart that wisdom to our team. We did that but we didn’t heed it, and that’s the disappointing part. The good part is we fought back. We really competed. I thought guys really stepped up and made some plays, and I thought the freshmen were outstanding.’
The Bears were ice cold in the first half, opening the game 2 of 10 and hitting just 26.9 percent overall and making just 2 of 10 from three-point range. UCA trailed by as much as 16 points at the 4:10 mark and were down 34-20 at the break, their lowest scoring half of the season, beating the 28-point effort against South Carolina State on Nov. 21. UCA also turned the ball over 13 times and was outrebounded 22-15.
UCA had scored 39 first-half points in their earlier win over Morehead State at the Farris Center.
After the Eagles pushed their lead to as much as 21 points in the first five minutes of the second half, senior guard Jordan Howard started an 8-0 run for the Bears with a three-pointer and redshirt freshman Jared Chatham scored twice off the bench to get UCA within 51-38 with 13:00 left. The Bears would eventually tie the game at 71-71 on a three-pointer by Koval with 1:38 remaining. Free throws allowed the Eagles (4-6) to grab the lead again before a tip-in by senior Mathieu Kamba got the Bears with 78-76 with 18.1 seconds left.
The Eagles turned the ball over but UCA misfired on a shot attempt. However, MSU’s Djimon Henson attempted to run the baseline on the inbounds play, giving UCA the ball back under its own goal. Jones found Koval charging down the lane for the assist as Koval tied it with the dunk, just his second basket of the game.
Thatch Unruh gave the Bears an early lead with a three-pointer in the opening seconds of overtime before MSU took control again. A three from Howard got UCA to within 94-92 with under 30 seconds remaining but MSU got a dunk from Malek Green and a pair of free throws from Jordan Walker to seal it.
“We just have to understand that this is game where you can’t take plays off, you can’t take minutes off, and you certainly can’t spot your opponent a 21-point lead on their court,’ said Pennell. “I thought the first six or seven minutes, we got some great looks but just didn’t make them. And then I thought we kind of tried to wake up, and I’ve seen this so many times. Usually when a team is flat, they understand they are flat, but then they over compensate.
“And what I thought everyone did was they went off on their own. We took some bad shots, we rushed some shots, we made errant passes four rows up (in the stands). And it was just trying too hard. But where the maturity came in was after halftime. I talked to them a little bit, and didn’t really jump on them much. I left them alone and said you guys solve this. And I thought they came out with a different look and played more like the UCA teams we’re used to.’
UCA was a different team in the final 20 minutes of regulation and overtime. The Bears shot 55 percent from the field in the second half and made 6 of 16 from beyond the arc. But it was not enough to overcome a big discrepancy at the free-throw line. MSU finished the game 30 of 37 (81.1 percent) at the line, with Jordan Walker going 11 for 11 and Londell King 8 of 9.
The Bears, who lost to No. 20 UCLA 106-101 back in November in their only other overtime game this season, scored 58 points in the second half and an additional 16 in overtime after scoring just 20 in the first half. Howard, who arrived in Morehead early Sunday morning after graduating from UCA on Saturday, topped the Bears with 32 points and six assists, his seventh career game with at least 30 points, and second this season after scoring 35 at UCLA.
Senior Mathieu Kamba added 19 points and 9 rebounds for the Bears, while senior Thatch Unruh had 10 points. Jones finished with 5 points, five assists and three steals after a career-high 16 in the first meeting with the Eagles.
UCA continues its road trip at Oregon on Wednesday night. Tipoff is 10 p.m. (CT) from Matthew Knight Arena. The Bears will then have a break before Southland Conference play begins on Dec. 28 against Texas A&M-Corpus Christi at the Farris Center.