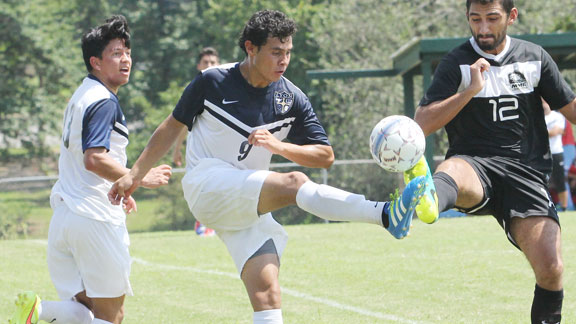 BATESVILLE – Ulises Caba Cordova scored a golden goal in the third minute of overtime to seal a win for the No. 24 Lyon men’s soccer team over Martin Methodist College (Tenn.) on Saturday. Lyon scored the final two goals of the game in a span of 18 minutes to pick up their first win of the season.

– Cordova scored two goals in the game with the first coming in the 35th minute.
– Martin Methodist’s Jack McCarren scored the only goals for the RedHawks in the 55th and 70th minutes.
– Edgar Lopez and MMC’s Yohann Bedos each recorded seven saves in the game.
– Jack Fleming added the other goal for the Scots and led the team with six total shots.

Lyon scored the first goal of the game in the 35th minute when Cordova received a pass from Mario Alonso. Martin Methodist’s McCarren then added two unanswered goals to give the RedHawks a 2-1 lead, one of which was a free kick from 25 yards out on the left side.

The Scots found some life however, in the 80th minute when Fleming received a pass from Arne Meyer and sent a ball past the MMC goalkeeper to tie the game at two. The match had to go into overtime before a victor was decided, and that is when Cordova’s heroics gave Lyon a win.

Cordova sent a header eight yards in front of the goal past Bedos, to give Lyon the victory.

WHAT’S AHEAD FOR THE SCOTS
Lyon will host the University of the Ozarks (Ark.) on Thursday at 4 p.m. The Scots then host Oklahoma City University on Sept. 3 at 4 p.m.