Day in the life of a swimmer 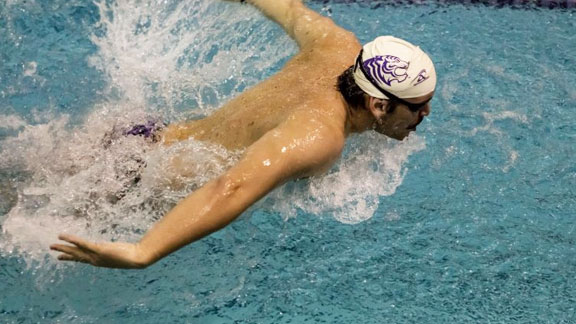 Ever wonder how a typical collegiate athlete’s day goes? Ever wonder what they do different from that of a non student-athlete on a daily basis?

Ouachita head swim coach Steven Bostick described what a typical day in the life of an OBU swimmer looks like, as he was once a swimmer himself at Ouachita.

“As an ex OBU athlete, I’d say it looks a lot like this: 5:30-7:30 a.m. morning practice. Usually an hour of swimming focused on power, speed and kicking. An hour of weights. Anything from body weight to Olympic lifting, because strength to body weight ratio is key. Eat breakfast, go to class and then 3:30 to 5:30 p.m. practice. Two hours of swimming, heavy aerobic work twice a week. Two days of anaerobic threshold and one day of recovery and one day of lactate production” [a type of training], Bostick said.

He mentioned that the above is not every day, because of the NCAA 20 hour rule, but they do practice 19.5 hours a week.

Sophomore kinesiology major Claire Bristrow described what a typical day of hers looks like. She participates in the 200 freestyle and the 500 freestyle.

“I wake up really early. It depends on the day, but on average I’ll usually wake up at 5 o’clock (a.m.) and head straight to the pool, and practice will usually be over by seven,” Bristrow said.

One might wonder if she eats anywhere between waking up and practicing, because surely she doesn’t practice on an empty stomach.

“I’ll have a protein bar before practice, and after, I get changed and go to the cafeteria and eat breakfast, and immediately go from breakfast to class,” Bristrow said.

This is just the beginning of her day. She has already been up for three hours while others are still sound asleep.

“I’ll go to lunch, and in between lunch and practice in the afternoon, I’ll try to do some homework and take a nap. After that, we’ll have a second practice from 3:30 to 5:30 p.m. We do that every day of the week except for Wednesday mornings. After practice, we eat dinner and repeat the process,” Bristrow said.

As you can see, the life of being a swimmer at the collegiate level isn’t easy. There are long, hard hours that are put in every day, both in and out of the pool. Time management is probably the biggest key to being successful in the pool and in the classroom.

It certainly takes a lot to earn the title of being an “OBU Tiger Shark.”

This story was first published on obusignal.com and was reposted with permission.