Early deficit too much for Bears in loss 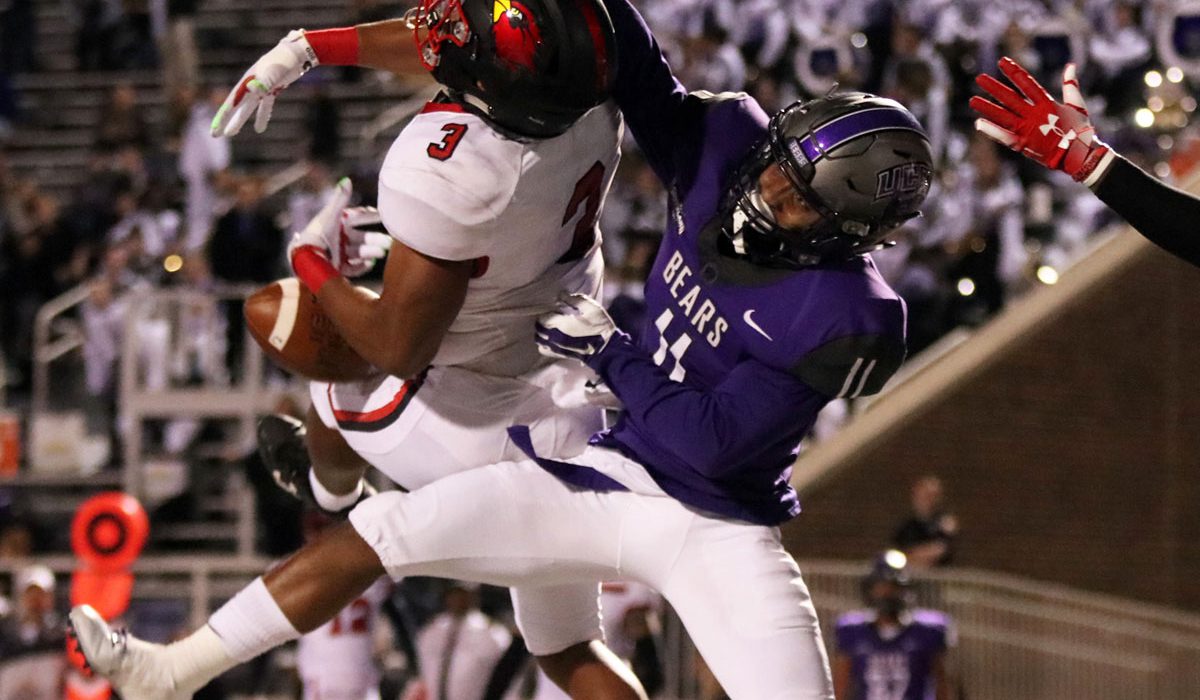 CONWAY – The University of Central Arkansas Bears dug themselves a three-score deficit against the hottest team in the Southland Conference and could not come back Saturday night in a 38-24 loss to the Lamar Cardinals at First Security Field at Estes Stadium.
The 19th ranked Bears (5-4, 4-3) lost their first Homecoming game since 2002 and fell to the Cardinals for the first time in eight meetings, also missing out on a chance to move back into a first-place tie in the conference. First-place McNeese State, which had a one-game lead on UCA and three other teams heading into Saturday, lost 23-6 to Southeastern Louisiana. Lamar (5-4, 4-3) won its fourth straight game after an 0-3 start in the SLC.
The Cardinals scored on the second play of the game on a 28-yard pass from Jordan Hoy to Mason Sikes, set up by a 47-yard run on the first play, for a quick 7-0 lead just 21 seconds into the game. UCA responded with a 7-play, 70-yard drive that took just 2:43, ending in a 23-yard touchdown pass from redshirt freshman Luke Hales to senior Lester Wells to tie it at 7-7.
From there, the Bears traded field goals for touchdowns the rest of the first half, resulting in a 35-16 halftime deficit. Lamar scored four times before halftime, all touchdowns, while UCA got field goals of 24, 32 and 36 yards from senior Matt Cummins. The Cardinals finished the first half with 427 yards of total offense, averaging 10.4 yards per play. Lamar had four pass plays of at least 25 yards and two runs of at least 20 yards. Hoy completed 12 of 18 for 285 yards and four touchdowns in the opening half.
The Bears got 115 rushing yards from sophomore Kierre Crossley on just seven carries in the opening 30 minutes, but Hales was just 5 of 19 passing for 91 yards before halftime.
The second half was more of a defensive battle, with UCA holding Lamar to just 85 total yards and a 27-yard Elvin Martinez field goal. However, the Bears’ offense never got untracked, despite a gift turnover at the Lamar 15 with 10:50 left to play. Junior defensive end Chris Terrell sacked and stripped Hoy and senior tackle Eric Jackson fell on the ball at the 15. But the Bears fumbled on the first play and gave the ball back to the Cardinals at the 20.
The Bears got a 2-yard touchdown pass from junior running back Carlos Blackman to junior tight end Luke Ross on a direct snap play with 11:36 remaining to cut the margin to 38-24 just before the Lamar fumble. From there, UCA turned the ball over on downs on three consecutive possessions down the stretch. The Bears got into Cardinal territory one final time when Hales hit Brandon Myers for 30 yards on first down. But an offensive pass interference call against UCA and a sack ended the threat with 2:22 left to play.
UCA finished with a respectable 435 yards of total offense, including 176 on the ground. Crossley had 115 yards, his second 100-yard rushing effort of the season, while junior Carlos Blackman had 70 on 12 carries and also threw his first career touchdown pass. Defensively, Terrell finished with seven tackles including two sacks and another tackle for loss and a forced fumble to earn the L.B. Jackman Award that goes to the outstanding player in the Homecoming game.
Sophomore Jackie Harvell had 8 tackles and 3 tackles for loss, while Raphael Garner and Reggio Dean added 8 tackles each and Michael Ware had 4 tackles and two for loss.
Senior Jakari Dillard caught four passes for 83 yards for the Bears and Wells added three catches for 44 yards and a touchdown.
UCA continues its homestand next Saturday, hosting another red-hot team in Incarnate Word at 3 p.m. at Estes Stadium. UIW beat Sam Houston State 43-26 on Saturday and is now tied for first with McNeese State and Nicholls State at 5-2. The Bears, now in a four-way tie for fourth place, close the season at Abilene Christian on Nov. 17.