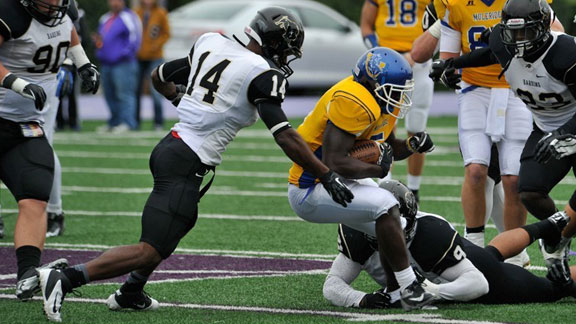 Former Harding University defensive back Tramaine Wilkes will appear as an actor in the film “GREATER” that will be released nationally on Friday, Aug. 26.

Wilkes, who played at Harding in 2011 and 2012, appears in some of the film’s game and practice scenes.

“GREATER” tells the story of Brandon Burlsworth, who many consider to be the greatest walk-on in college football history. Burlsworth walked on at Arkansas and was essentially told that he was likely not good enough to get the opportunity to play for the Razorbacks. Through incredible hard work and perseverance, Burlsworth not only eventually played at Arkansas (1995-98), he became an All-America and a two-time All-SEC selection. He was then a high draft choice of Indianapolis Colts but died tragically in an automobile accident 11 days after the 1999 draft.

Hollywood sports movie choreographer Jeff Sanders personally recruited Wilkes and all of the “real” football players who appear in “GREATER.” Sanders put all of the players who were through an NFL-like training camp in which they had to prepare for the filming of the game and practice scenes. The many football scenes which appear in “GREATER” and feature Wilkes were shot at Razorback Stadium in Fayetteville and at War Memorial Stadium in Little Rock.

Wilkes, a native of San Diego, California, played 22 games for the Bisons with 51 tackles and three interceptions.