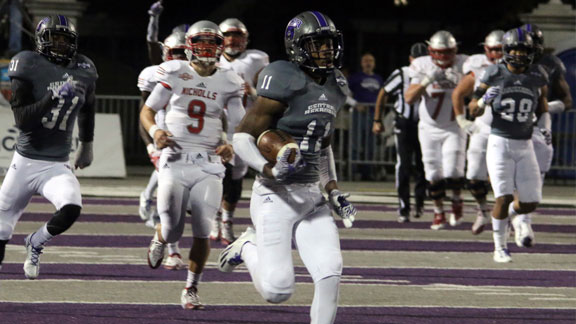 CONWAY – Three timely fourth-quarter interceptions carried the 13th-ranked University of Central Arkansas Bears to a hard-fought 31-24 victory over the scrappy Nicholls Colonels on Senior Day at First Security Field at Estes Stadium.
The victory moved the Bears to 9-1 overall and a perfect 8-0 record in the Southland Conference, tied with No. 1-ranked Sam Houston State. The battle for the SLC title between the Bears and Bearkats is set for next Saturday in Huntsville, Texas, in the regular-season finale.
UCA senior cornerback Tyler Williams picked off two passes and junior free safety Jaylon Lofton added a third interception as the Colonels’ offense managed only a 46-yard field goal by David McKey in the fourth period. Nicholls had taken a 21-17 lead with 11:42 to play on an 80-yard touchdown pass from freshman Chase Fourcade to senior C.J. Bates.
But from there, UCA’s defense took over, with interceptions on three of Nicholls’ final four possessions as the Bears stretched their winning streak to eight games.
The first half was a game of special teams miscues for both teams. UCA missed a 39-yard field goal and dropped a wide-open touchdown pass on a perfectly executed fake field goal attempt. The Colonels missed a pair of field goals and lost a fumble in their own end of the field in the opening half. The Bears grabbed a 10-7 halftime lead on the strength of a 32-yard field goal by sophomore Matt Cummins and a 1-yard touchdown run by senior Antwon Wells following the Nicholls fumble.
The Colonels (5-5, 5-3) scored on a 45-yard pass from Fourcade to Bates, who finished with nine receptions for 187 yards. Nicholls took its second lead of the night early in the third quarter on Kyran Irvin’s 1-yard run to make it 14-10. The Bears answered with a drive consisting mostly of freshman running back Carlos Blackman. He caught passes of 46 and 9 yards, then ran in from the 1 for the touchdown to give the Bears a 17-14 lead.
The Colonels, who had won two straight games and four of the past five coming into the game, scored in just one play, the 80-yard pass to Bates. Blackman followed with a 15-yard scoring run to give the Bears the lead for good at 24-21 with 11:16 to play. Lofton, a junior from Forest, Miss., picked off a Fourcade pass after the Colonels had driven to the UCA 16 and returned it 79 yards for a touchdown, and a 31-21 UCA advantage.
Nicholls got the ball back twice after its field goal but Williams ended both drives with an interception, the first on the Colonel’s first play from scrimmage at the 30. The second came on fourth and 29 at the UCA 36 after the Colonels were called for offensive pass interference on what looked to be a 38-yard touchdown pass to Lofton, setting up a fourth and 29.
Nicholls outgained the Bears 471 yards to 382 yards and averaged 6.1 yards per play. UCA’s rush defense, leading the nation at 60.8 yards allowed per game, gave up 131 to the Colonels. UCA did record seven plays for lost yardage, including 2.0 tackles for loss and a sack by senior tackle Jordan Toliver. Williams had five pass breakups to go with his two interceptions. Junior rover George Odum forced a fumble and senior safety Brandon Porter recovered for the Bears.
A week after turning the ball over six times in a 34-14 win at Stephen F. Austin, the Bears easily won the turnover battle 4-1 on Saturday. Penalties, however, haunted the Bears again with 11 flags for 135 yards. Hildebrand, a junior from Bossier City, La., completed 20 of 34 passes for 257 yards but no touchdowns. Blackman led the ground game with 53 yards rushing on eight carries and also caught two passes for 55 yards.
UCA punter Patrick Ponder kicked six times for a 47.7-yard average and pinned the Colonels at their own 5 with a 60-yarder early in the third quarter.
Redshirt freshman linebacker Allen Pittman topped the Colonels with 19 tackles (10 solos), including 2.0 for loss and a fumble recovery.
UCA and No. 1 Sam Houston meet at 2:30 next Saturday at Bowers Stadium to decide the SLC championship on ESPN3. The last SLC title for the Bears came in 2012 when they tied SHSU with 6-1 records but won the head-to-head matchup 24-20 in Conway early in the season.