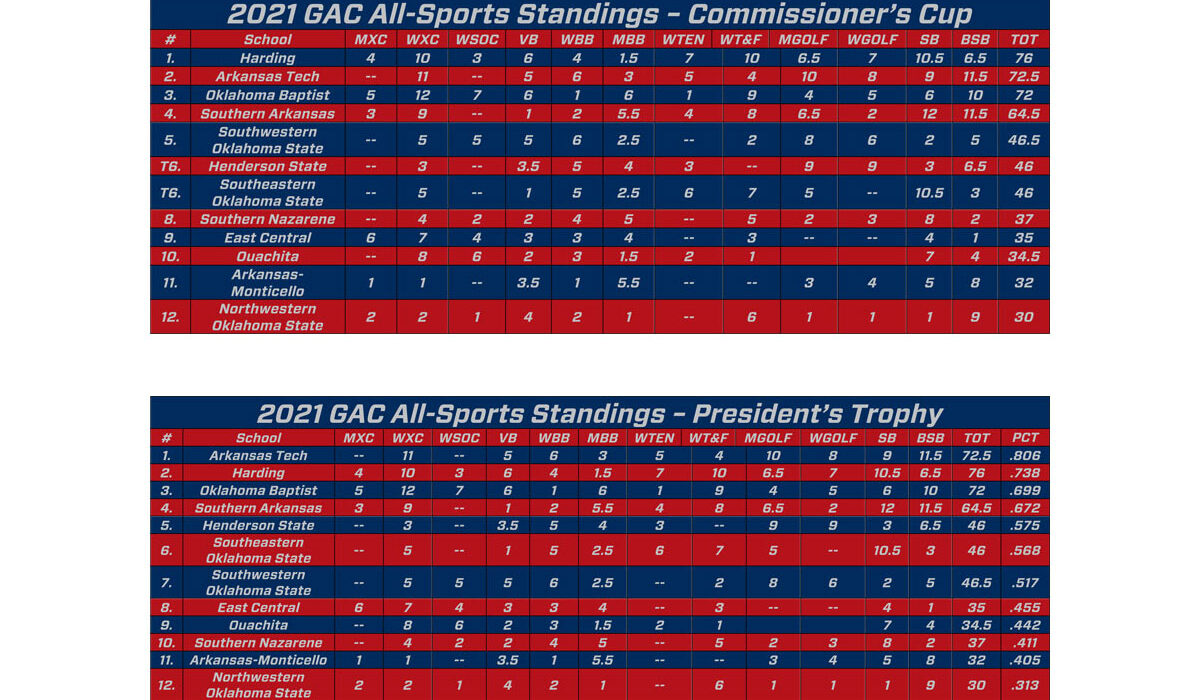 Arkansas Tech became the first recipient of the President’s Trophy – given to the program that earns the highest percentage of points based on the sports they sponsor. The Wonder Boys won their second-straight men’s golf title and continued the postseason success with the conference’s first team national title. They tied for the regular-season title in baseball. The Golden Suns won the Eastern Division in women’s basketball and placed second in women’s cross country, women’s golf and volleyball.

Oklahoma Baptist took third in both standings. The Bison claimed GAC titles in women’s cross country – their fourth straight – and women’s soccer – their third in four seasons. They added division titles in men’s basketball and volleyball. The Bison completed an undefeated season in volleyball and reached No. 1 in the AVCA rankings.

Southern Arkansas finished fourth. The Muleriders captured their fifth regular-season title in baseball and finished atop the softball standings for the third-straight season. SAU tied Arkansas-Monticello for the Eastern Division crown in men’s basketball. The Muleriders qualified for the NCAA Men’s Basketball Tournament for the first time in program history.

Southwestern Oklahoma State, Henderson State and Southeastern Oklahoma State took the next three positions. The Lady Bulldogs basketball team won a regular-season title for the fourth-straight season and reached the finals of NCAA Regional Tournament. The Reddies outlasted Arkansas Tech in a playoff to win their second women’s golf title. The Savage Storm finished as the runners up at the Women’s Basketball, Tennis and Softball Championships.