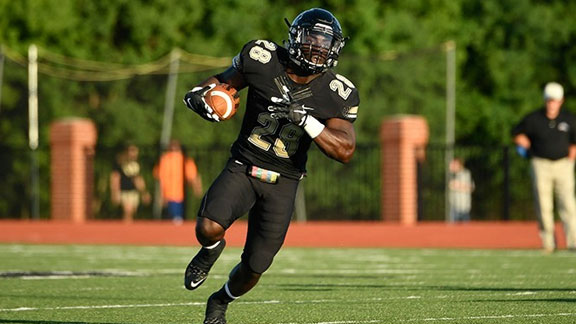 SEARCY – On a hot Homecoming afternoon, the No. 5 Harding Bisons rolled up 506 rushing yards and defeated Southwestern Oklahoma 42-27 to remain undefeated and clinch at least a share of the Great American Conference championship.

A crowd of 5,100 at First Security Stadium witnessed the fifth-best rushing effort in program history and the eighth 500-yard rushing effort. Quarterback Park Parish and slot back Zach Shelley both rushed for over 100 yards and had two touchdown each.

The victory moved Harding to 9-0 with two games remaining in the regular season. The Bisons last won a regular-season conference championship in 1989 when Harding was a member of the NAIA Arkansas Intercollegiate Conference.

Southwestern Oklahoma had its four-game winning streak snapped and fell to Harding in Searcy for the fourth consecutive game.

Parish rushed for a career-high 153 yards and scored Harding’s first and last touchdowns. The last coming after Southwestern Oklahoma had closed Harding’s lead to 35-27 with 7:49 remaining on a 7-yard Karltrell Henderson run.

Parish guided the offense 61 yards on 10 plays, and his 23-yard run that included two broken tackles gave Harding a 15-point lead with only 2:23 left in the game.

Shelley had 133 rushing yards on only seven carries, a 19.0-yard average, and scored on runs of 66 yards late in the first quarter and 58 yards on Harding’s first possession of the second half.

Harding controlled the ball for almost 41 minutes and gained a season-high 560 yards on 78 plays. The Bisons have 1,093 total yards in their last two games. Southwestern ran only 50 plays, including just 17 rushing plays, the fewest ever in a game by a Harding opponent.

The Bulldogs caned 378 total yards but were only 2 of 10 on third down. Southwestern had the ball fewer than five minutes in each quarter except the first.

Harding’s defensive standouts included senior defensive back Scott Middleton, who had seven tackles, including a tackle for loss, and two pass breakups. Junior Daylon Markham had five tackles and his second interception of the season. He returned it 32 yards to the Southwestern 11, and Dwayne Carter scored two plays later on a 4-yard run to give Harding a 28-13 lead at halftime.

Harding plays its final regular-season road game next Saturday at Northwestern Oklahoma in Alva. Kickoff is a 2 p.m.