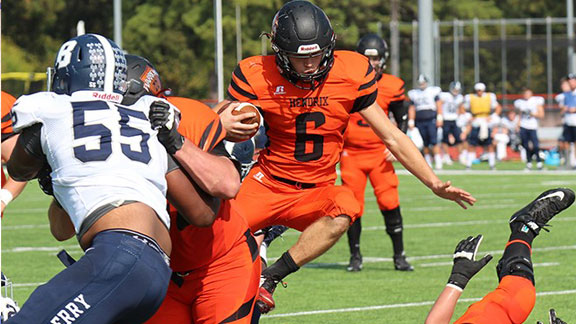 On the third play of the game, the Warriors (6-2, 4-2) got an interception from sophomore cornerback Demarcus McDaniel, who returned the ball back to the Rhodes 18. Senior quarterback Seth Peters connected with junior Ben Luedtke for a 10-yard score to give Hendrix a 7-0 lead just 51 seconds into the game.

The Lynx responded with a 10-play, 53-yard drive to tie it up on their next drive. A 46-yard run from Warrior running back Dayton Winn set up a 1-yard pass from Peters to senior Ethan Hoppe. The ensuing extra point was missed, giving the Orange and Black a 13-7 advantage. Rhodes turned the ball over on downs and the Warriors took advantage with a 59-yard bomb from Peters to Luedtke to make the game 20-7 towards the end of the opening quarter.

Rhodes running back Monroe McKay capped another 10-play drive with a three-yard touchdowns to start the second quarter. After a three-and-out for the Warriors, the home team took a 21-20 lead on a 37-yard pass from P.J. Settles to Xavier May with 12:41 left before the break. Hendrix threw a pick on the next possession, but forced the Lynx to punt. However, the Warriors fumbled on their first play and Rhodes capitalized with a 10-yard pass from Settles to Carter King to go up 28-20.

The Warriors marched down the field 70 yards over 11 plays, ending in a 13-yard scoring catch by Hoppe with 1:49 left in the half. The Lynx managed 93 yards over five plays to score just 40 seconds later. Hendrix made the game 35-34 at the end of the half on a 35-yard hail Mary pass that Hoppe grabbed out of the air.

The third quarter, Rhodes scored on a 27-yard throw to Josh Lucas. Hendrix answered right back on a 12-play, 67 yard march down the field, ending with a Winn two-yard scramble. On the next drive, Settles found Josh Loud for a 73-yard bomb, setting up another touchdown pass to Alex Richards, giving the Lynx a 49-41 lead. Hendrix finished the scoring in the third quarter on a 42-run by Winn. Their two-point conversion was thwarted, making the game 49-47 headed into the final frame of action

Warrior freshman defensive back Cory McGonigal picked up a Lynx pass at the goal line. Hendrix finally regained the lead after a couple of big catches which set up a Winn 1-yard rush to make it 54-49 in the Orange & Black’s favor.

Rhodes retook the lead 55-54 after another long drive, capped by a Settles one-yard run. Their two-point conversion failed as well with 6:17 remaining.

Hendrix responded by marching down the field to the Rhodes 4. Peters rushed getting to the 1, but a fumble was forced by Elliott Tostrud and recovered by Pat West to give the Lynx the ball back with 1:48 left. Rhodes ran four plays before finally forcing to punt, giving Hendrix the ball back at their own 44 with 33 seconds left. The Warriors got the ball down to the Lynx 23, but Peters was sacked by Duke Sherrell, forcing another fumble which Tostrud recovered, ending the game.

Hendrix tallied 670 total yards, the second most in school history, and averaged 8.2 per play, but four turnovers proved costly. Rhodes had 616 yards and averaged 7.6 yards per play.

Rhodes Notes
– Settles went 23-of-40 passing for 425 yards and five touchdowns. He also rushed for 42 yards and two scores.
– McKay finished with 19 carries for 96 yards and a TD.
– Loud had four catches for 145 yards.
– Tostrud led the Lynx defense with 14 tackles, one sack, 1.5 for a loss, a forced fumble and a fumble recovery.
– Sherrell had 12 tackles, two for a loss, a sack and a forced fumble.

Up Next
Hendrix will travel to Washington University of St. Louis for another SAA match-up next Saturday. MEMPHIS, Tenn. – The Hendrix College football team came inches away from defeating Rhodes College in road Southern Athletic Association action at Crain Field Saturday afternoon. The host Lynx (5-3, 3-3) hung on for 55-54 win in wild game filled with offense and several turnovers.