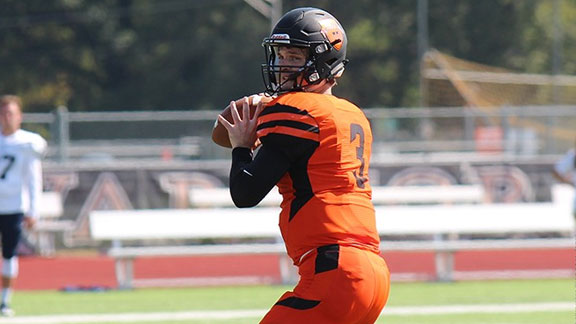 CONWAY – The Hendrix College football team closed out their 2016 campaign in dominant fashion, defeating Sewanee – The University of the South 62-14 at Young-Wise Memorial Stadium Saturday afternoon.

Sewanee turned it over on downs on the opening drive of the game and Hendrix scored three plays on a Seth Peters pass to senior tight end Doug Phillips for 12 yards. The Tigers used a 13-play 74-yard drive capped by a three-yard keeper from quarterback Sam Hearn to tie it up.

The Warriors opened the second quarter with a five-yard pass to junior Nate Hodapp to take the lead for good. Senior defensive end Tyler Clifton sacked Hearn for nine yards and caused a fumble, which led the Tigers punt being blocked by freshman Trace Sugg, giving Hendrix just 30 yards to go for another touchdown. Back-to-back 15-yard passes to Hodapp resulted in the home team taking a 21-7 lead early in the second. Hendrix scored again on their next drive when Peters found junior Ben Luedtke for a two-yard score.

Sewanee punted to Dayton Winn who returned it for a 53-yard touchdown, the first punt return TD in school history to give Hendrix a 35-7 lead just before halftime.

The Warriors scored on the first drive of the second half when Hodapp caught a pass for a 36-yard score. Later in the quarter, sophomore Michael Spainhour found the end zone on a 26-yard pass from Peters to put Hendrix up 49-7. The Tigers’ ball was stripped by junior Jake Brantley and picked up junior Kody Smith who returned the fumble for a school record 47 yards. Two plays later Peters foundDayton Winn for a 47-yard pass to go up 55-7.

Sewanee made the game 55-14 early in the fourth quarter on a Allan Puri 11-yard pass to Steven Hearn. Hendrix tacked on their final score when Winn flicked a five-yard pass to Clifton with 8:32 left in the game.

Hendrix Notes
– The Warriors compiled 6,000 yards of total offense this season, averaging a new NCAA Division III record of 600 yards per game.
– Their 62 points was the most since bringing back the program in 2013.
– Peters went 23-of-27 passing for 414 yards and a school record seven touchdowns. He also set a school record with a 296.5 pass efficiency and 14.4 yards of total offense per play.
– Winn rushed 10 times for 65 yards, was 1-of-1 passing for five yards and a TD and had four catches for 77 yards and a touchdown.
– Hodapp finished with five catches for 91 yards and tied the school mark with three touchdowns.
– Hoppe had four catches for 114 yards.
– Stanton tied his career high with 10 tackles, 3.5 for a loss, and two sacks.
– Ramirez and junior linebacker Jared Goff each had nine tackles.
– Smith finished with eight tackles, as did Brantley and junior safety Michael Kramer.
– Clifton recorded seven tackles, 3.5 for a loss, a sack and a forced fumble.