Hogue leads Falcons to win over Eagles on Senior Night 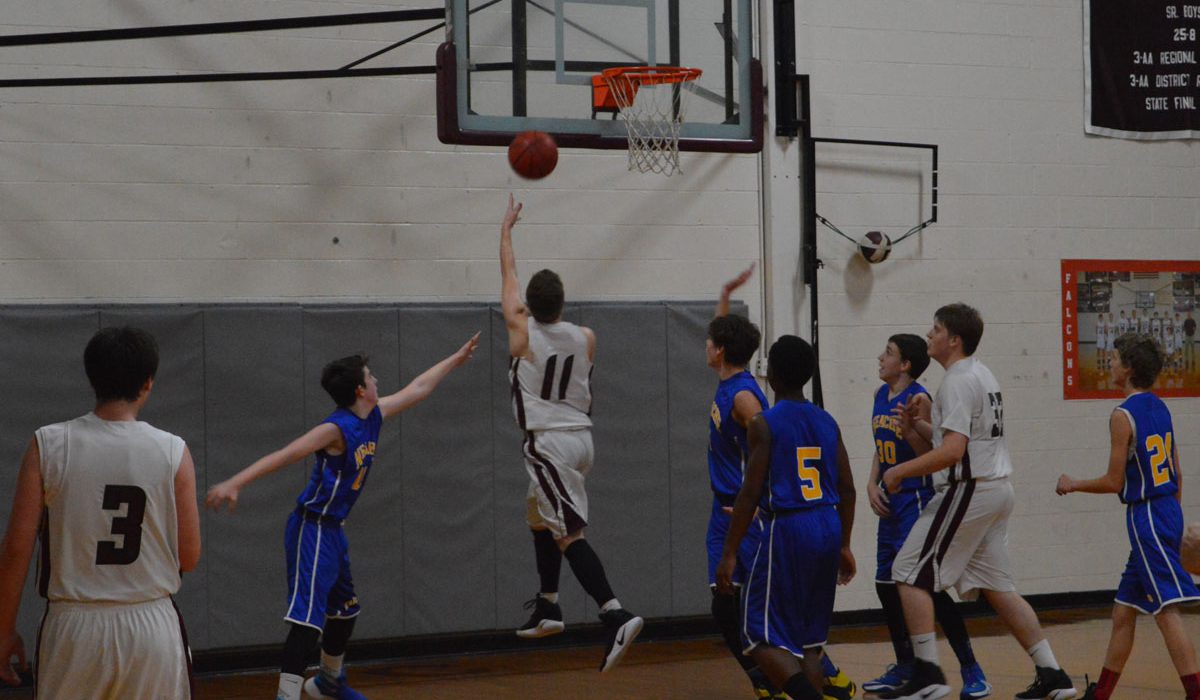 Hogue drives in for a score. Photo by Luke Ellis.

PARAGOULD – The Crowley’s Ridge Academy Falcons defeated the Northeast Arkansas Christian Home Educators (NACHE) Eagles, 66-56, on Feb 7 at the Falcons Gym. Griffin Hogue led the Falcons with 23, scoring 18 in the first half.

The non-conference win improved the Falcons to 11-15 overall, 1-5 in conference. The loss dropped the Eagles to 1-8 overall.

The Falcons took a 48-39 lead into the fourth quarter. Hogue extended the lead to double digits after he opened the quarter with a steal and fastbreak layup to make it 50-39 with 7:39 remaining. The Eagles responded with a quick 5-0 run after Nathan Mathis hit a deep three and Garett Fimicum made a driving layup to make it 50-44 with 5:36 remaining.

The Falcons extended their lead back to 10 after Noah Elms grabbed a defensive rebound and took it coast-to-coast down the left side of the court for an easy lay-in to make it 54-44 with 5:05 remaining in the fourth.

The Eagles made it interesting after Elijah Ellenburg connected on a three in the left corner to close the Falcons lead to 58-52 with 2:28 left. Jacob Pillow gave the Falcons some breathing room after he hit two free throws to make it 61-53 with 1:40 remaining. The Falcons went 10 of 13 from the free throw line in the fourth.

The Eagles tried to make a late run after Ellenburg scored off a no look pass from Mathis to make it 63-56 with 54 seconds remaining. The Falcons sealed the game after Elms recorded a steal with 47 seconds left in the game.

The Eagles came out of halftime on fire. After an early bucket by Pillow to make it 41-24 Falcons, the Eagles went on a 15-4 run to pull within four with 3:38 remaining in the third. Four different Eagles scored during the run. The Falcons responded with a 5-0 run of their own to end the quarter leading 48-39.

The Falcons went on an 11-0 run to open the second quarter after forcing four straight turnovers to make it 30-13 with 5:25 remaining. Hogue scored five in a row during the run, including a three from the left corner. He had 13 in the quarter.

The Eagles pulled within nine after Fimicum hit back-to-back threes to make it 30-21 with 3:50 left in the quarter. He hit four triples in the game.

The Falcons extended their lead back to 13 after Elms recorded a steal and converted a fastbreak and-1 layup to make it 37-24 with 15.7 seconds left in the second.

The Eagles jumped on the Falcons early on, connecting on two consecutive triples to take a 6-2 lead with 6:25 remaining, their biggest lead of the night. The Falcons tied the game after Landon Brinkley hit a jumper to make it 6-6.

The Falcons went on a 12-2 run that led to an Eagles timeout with 1:20 remaining in the first. Pillow had five during the run, including an and-1 conversion. Hogue finished the run with a three that made it 18-8.

The Falcons wrap up regular season play on Feb 10 as they take on the Walnut Ridge Bobcats away.