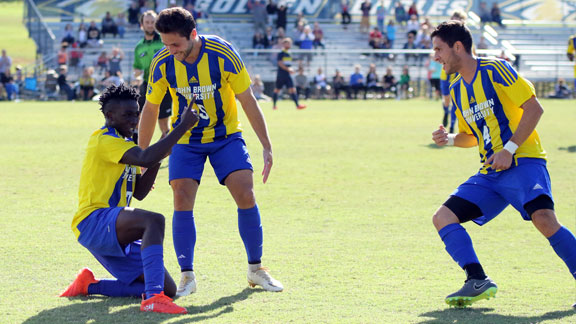 SILOAM SPRINGS – While the No. 18 and second-seeded John Brown University men’s soccer team took nearly a half to get its conference-leading offense going, sophomore Kelvin Omondi struck just before the break and sophomore Ryan Williams struck late for insurance as the Golden Eagles moved into the Sooner Athletic tournament semifinal with a 2-0 win over seventh-seeded Texas Wesleyan on Saturday (Nov. 5) afternoon at Alumni Field.

The win over the Rams (4-11-2) was the second in as many weeks for the Golden Eagles (13-2-2) as JBU was the first team in bracket to punch a spot in the conference final four teams.

While Wesleyan often clogged up the middle and showed more of an offensive push than last week, also a 2-0 Golden Eagle win, the hosts held the vast majority of the possession time and a 22-7 shooting margin.

Junior Adam Holt needed just a pair of saves, but in doing so, set a new program record with his 11th shutout of the season and the 23rd of his career. His actual 23.1 clean sheets, after splitting a game with Connor Georgopulos in a 6-0 win over Evangel (Mo.) in 2015, surpasses a 34-year program record (23) set by Steve Wilson in 1982. With one more clean sheet, Holt can also set a new single-season shutout record, as Wilson’s 12 in 1981 still stands.

Omondi’s 15th of the season was a result of sharp passing, none more so than junior Collin Smith’s no-look flick deep in the box. Sophomore Ashby Clark began the counterattack on the right flank, sending a low cross into the box. Smith changed the angle of the pass, which went directly to Omondi, seven yards out from the goal, who smashed in a one-touch past TWU keeper Marko Jovanovic for his SAC-leading 15th strike of the season.

After out-shooting the visitors 9-3 in the first half, the Golden Eagles continued the ball possession dominance and fired 13 targets toward Jovanovic, including seven on target.

Finally, in the 85th minute, JBU earned its much-needed insurance goal when Williams’ eighth of the season ended any and all hopes the Rams had at a late comeback. Junior Steve Teshima’s cross from the right flank found freshman Amilcar Gonzalez waiting at the back post. Instead of attempting a shot, Gonzalez headed the cross directly to Williams as he waited in the slot. Williams ripped a low shot to the bottom left corner to solidify John Brown’s third-consecutive trip to the semifinals in as many seasons.

Jovanovic finished with seven saves, but was dinged with the loss. Holt moved his season record up to 13-2-2 with the win, which is tied for second all-time in single-season program history.

The Golden Eagles will await the result of sixth-seeded Bacone (Okla.) and third-seeded Science & Arts (Okla.). The winner of that quarterfinal match will travel to Siloam Springs on Tuesday for a 4 p.m. kick off.