Home truly is sweet in the GAC 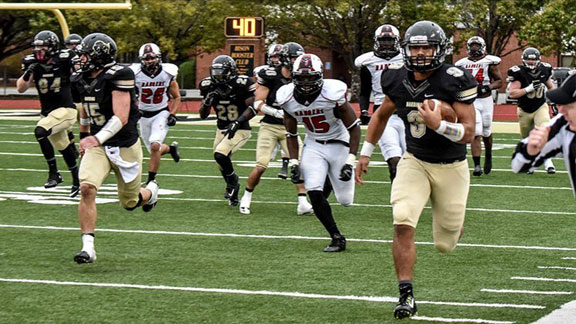 It’s just the way the schedule worked on in Week Nine of the Great American Conference regular season.

All six games were played in Arkansas.

And in the matchups of Arkansas vs. Oklahoma schools, all six were won by the Arkansas schools.

But before the conclusion is drawn that this is just an ‘Arkansas thing’, this turnout could also be looked at as simply a matter of home field advantage. And that advantage is a real thing in the GAC in 2016.

All 12 GAC schools play an 11-game schedule comprised completely of conference opponents. And through Week Nine, the home team has a combined record of 36-17.

And the statistic can be taken a bit further.

If the records of East Central and Southern Nazarene are taken out of the equation – as both teams are 1-8 and have struggled both away and at home – the advantage is more pronounced. The team playing on its home turf is 35-10.

It is a conclusion best represented by the teams with records right in the middle of the pack, and it shows that to have a winning record in the league, it is important to win at home.

Arkansas Tech, Ouachita and Southeastern are each 5-4 overall. ATU and Ouachita are both 4-1 at home and 1-3 on the road. SE is undefeated at home at 4-0, but has had little success on the road at 1-4.

Arkansas-Monticello and Northwestern are both 4-5. UAM is 4-1 in Monticello and winless in four tries on the road. NWOSU is 3-1 at home and 1-4 away.

Southwestern is the lone anomaly at 2-2 at home and 2-3 on the road.

All six games next Saturday will be in the Sooner State. The statistic will be tested again.

But with two weeks to play in 2016 for GAC teams, it seems there really is no place like home.