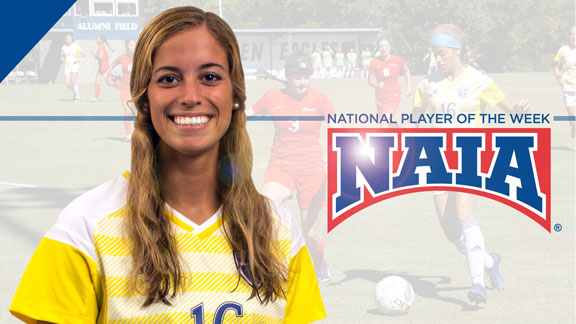 Howell’s two-match surge came at the expense of Oklahoma City and St. Gregory’s (Okla.), in which she racked up seven goals, or 64 percent of the Golden Eagles’ offensive output in the 2-0-0 week that helped JBU maintain its grasp on first place in the Sooner Athletic Conference.

“I was excited to hear that Kristen was chosen for this award,” said head coach Kathleen Paulsen. “She had an exceptional week with multiple quality goals in both matches. As a team, we’ve been working on having quality in the final third and Kristen and the team have found success over the last couple of weeks. It’s exciting to see.”

Howell now stands at 10 goals and three assists on the season (23 points) and moved into fourth place in the Sooner Athletic top scoring list, behind teammates Jastin Redman and Aspen Robinson and behind conference leader, Nadine Jaimes of Southwestern A.G. (Texas).

The Golden Eagles have been on an unprecedented streak as of late. Over the team’s last six outings, John Brown has outscored its opponents 34-0 and accumulated six straight clean sheets. Over the same span, JBU has out-shot its opponents 174-32, or nearly 5.5-1.0.