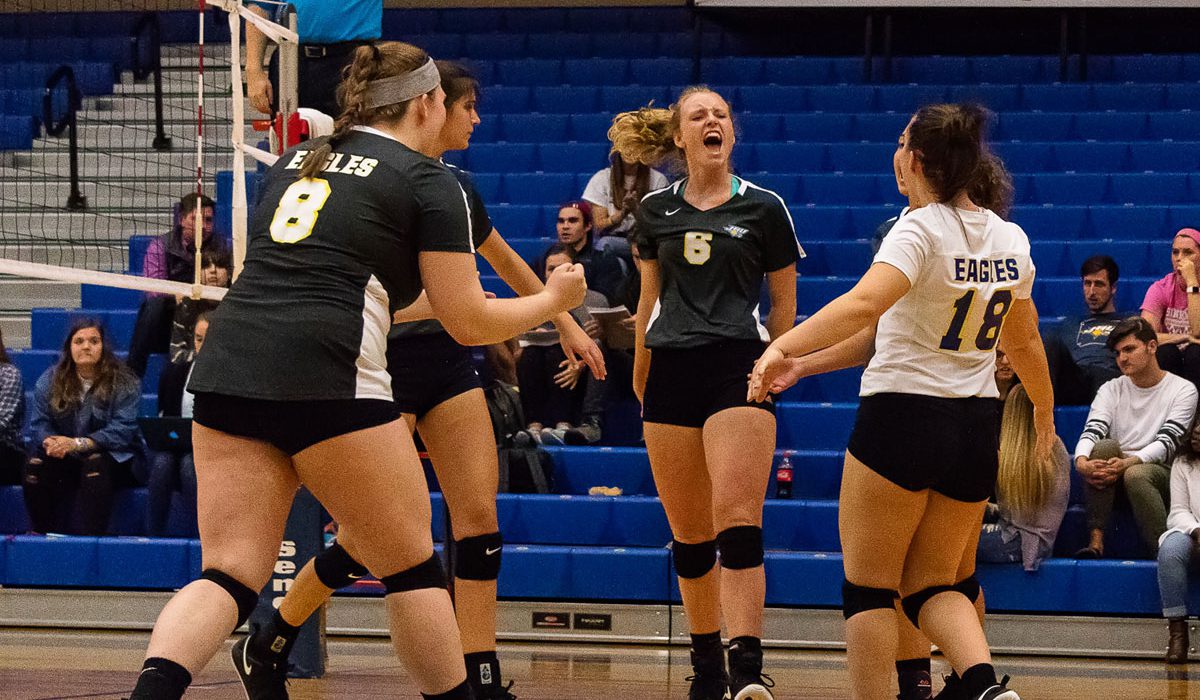 Both passers had career nights for John Brown, as freshman Carries Ciesla passed out 25 assists and junior Elizabeth Williams assisted on 35 of John Brown’s 72 terminations. The duo helped the hosts hit .245 (72-26-188) on the match.

“Tonight’s match against MACU was nothing less than two teams battling back and forth for just enough surges of momentum at critical moments to win sets,” head coach Ken Carver admitted. “MACU showed a lot of heart and grit to battle back from an 0-2 deficit and have our team on the ropes in the fifth before we were able to claw our way back and do just enough with a block termination and a timely overpass kill to seal the win.

“While we definitely showed some mental and physical fatigue in sets three and four, I was extremely proud of our players that they kept fighting and kept their communication positive in our huddles as to what we needed to do next. We did enough to grind out the win tonight and hold our place in the conference standing moving forward.”

Led by 19 kills from Da’Jah Thompson, MACU (10-12, 5-8) also earned 11 terminations from both Dianne Walter and Hannah Balzer-Lipsett and Alexa Bass assisted on 47 of the Evangels’ 60 kills.

Back-to-back John Brown attack errors allowed the visitors to capture match point, 14-13, but coming out of a timeout, the Golden Eagles responded with a Kinzee Mayo kill and, with the serve, stole back the match from MACU.

Glover and Davis teamed up for a rejection at the left pin to earn match point, and an overpass that was swatted down at the left line by Glover finished the match that lasted 2:16.

Davis led the JBU block effort at the net with two solo rejections and a trio of assists. Junior Jessica Meyer added four of her own while Glover contributed three, including half of the big-time stuff to move JBU to match point.

The Golden Eagles will now embark to Columbia, Mo. to take part in the Hampton Inn Classic, where it will face a trio of tough American Midwest opponents in William Woods (Mo.), Missouri Baptist and host Columbia (Mo.) over the four-match weekend tournament.