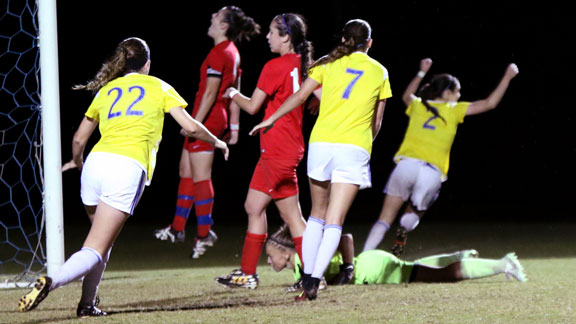 SILOAM SPRINGS – The first goal came quickly, but the insurance goal did not, as the No. 16 and top-seeded John Brown University women’s soccer team battled the elements and fourth-seeded St. Gregory’s (Okla.), finally landing a 2-0 victory and a trip to the Sooner Athletic tournament championship game on Monday evening at Alumni Field.

Sophomore Jastin Redman recorded goals in the sixth and 85th minutes, providing an early game winner and a late insurance marker, propelling the Golden Eagles (17-1-1) to its fourth-consecutive championship game.

In the other semifinal, third-seeded Science & Arts knocked off favorites second-seeded Texas Wesleyan, 1-0, on a late goal by Shannon Greenway in a scramble in front of the goal.

The matchup with the Drovers (12-7-1) will come as a rematch of the 2015 edition, however, the venue will change. Last season, despite Melody Hagen’s goal late in the regulation to tie the match at one, JBU dropped a penalty kick decision at Drover Pitch.

In tonight’s match, upstart St. Gregory’s (10-8-0) produced the first scoring chance just moments into the game as the JBU back line was adjusting to the slick surface. After the ball skipped past the defense, Abi Housecroft let go a shot that mandated senior Kristen Morency make an early-match save, helping set the tone.

After the initial save by Morency, the Golden Eagle back line did not allow another Cavalier shot attempt as the hosts maintained ball possession for the remainder of the contest, but also had to battle the constant rain that refused to leave Alumni Field.

John Brown capitalized early however, when sophomore Anna Brown’s centering pass found Redman at the doorstep of the SGU goal. After fighting off her defender, Redman calmly deposited the game winner, her 16th of the year, just 5:02 into the match past keeper Jena Flewelling.

If a 7-1 shooting margin wasn’t enough before the half, the Golden Eagles came out and posted a 12-0 advantage in the second half, but still struggled to put away the equalizer.

The Golden Eagles appeared to have tallied the second goal of the game in the 71st minute, but a late offsides call quickly ended the celebration, forcing JBU to find another goal to put away the Cavaliers.

Finally with just 5:06 left in the match, sophomore Anne Metz played a ball through the middle to Redman, who burned past a pair of defenders and into the box before releasing a shot to the far left post from nine yards out, notching her 17th of the season.

“I knew we would see a completely different team than last time because they were missing a lot of their key players,” said head coach Kathleen Paulsen, referencing John Brown’s 9-0 win over SGU earlier this season. “I think we generally struggled with our through balls that squeaked past us and went for goal kicks, but we really rose above it tonight.”

Morency picked up the win, moving to 15-1-1 on the year, and landed her 10th clean sheet of the year. Flewelling played well in goal for the visitors, making six saves on eight shots, but was dinged with the loss.

The Golden Eagles will now look to make its second trip to the NAIA National Championships in four seasons with a win over USAO. John Brown last went to the big dance in 2013, when it upended top-seeded Oklahoma City in penalty kicks at Stars Field. Since then, JBU has lost the last two title matches, both on the road, including a 1-0 setback at Oklahoma Baptist before last year’s heartbreak in Chickasha, Okla.

Friday’s match, scheduled for 5 p.m., is the first SAC tournament title match to be played at home in program history.