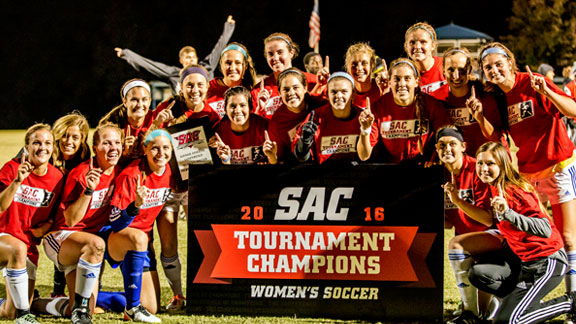 SILOAM SPRINGS – The top Golden Eagle scorers came through in the second half for a pair of goals, fueling the No. 14 and top-seeded John Brown University women’s soccer team to a 2-0 win over third-seeded Science & Arts (Okla.) in the Sooner Athletic tournament finals on Friday evening at Alumni Field.

With the victory, the Golden Eagles (18-1-1) not only earn its first tournament crown since 2013, but secure its fourth-ever spot in the NAIA National Championships. The national selection show will take place on Monday morning.

“That was an awesome team win,” head coach Kathleen Paulsen said. “The things we’ve been working on all year, we executed it. It’s rewarding when we get to do something like this together. It gives us a sense of unity. This is a really special group.

“I couldn’t be more proud. What they accomplished together is bigger than wins and losses, it’s together, seeking to honor God in the way they approach the game. We are looking forward to another game and another opportunity.”

The win for John Brown was its 14th-consecutive win, continuing a program-record winning streak. Last season, the Golden Eagles fell in penalty kicks at Science & Arts in the title game in Chickasha, ending JBU’s hopes of making the National Championships.

Paulsen has now guided the Golden Eagles to four-consecutive tournament title matches and now sports a 1-1-2 mark in the SAC’s biggest game of the season.

Sophomores Aspen Robinson and Jastin Redman each tallied their 18th goals of the season just two minutes apart in the second half, and senior Kristen Morency didn’t need to make a save the entire match as the JBU back line held the Drovers (12-8-1) to just one shot attempt, which came late in the 82nd minute.

The hosts out-shot the Drovers 12-0 in the first half, but only landed three shots on frame, including senior Sara Lachance’s blast in the 31st minute, prompting USAO keeper Brandi Hutchison to make a leaping save falling back into the goal, tipping the shot over the crossbar to preserve the 0-0 deadlock.

Finally, on its 17th shot of the game, Robinson unleashed her 18th of the season and sixth game-winner in the 55th minute. Junior Sara Frey intercepted a loose ball in the midfield and quickly counter-attacked by slotting the ball through to Robinson. Robinson turned and let go a 35-yard bomb that beat Hutchison just under the crossbar.

With the ball bouncing around the USAO goalmouth, Redman’s initial point-blank shot was stopped by Hutchison and a Drover defender was able to block sophomore Anna Brown’s put-back attempt a moment later. The Golden Eagles needed a third attempt, and with Redman crashing the goal, she buried her 18th of the year, all but assuring victory.

“It was a scrappy goal, but I was able to finally shoot it in the goal,” Redman said. “Finally.”

The Drovers did not register a scoring chance in the match as Morency landed her 11the shutout of the season.

“We’re happy with that win,” Robinson said. “Like Coach (Paulsen) said, it was a team victory.”