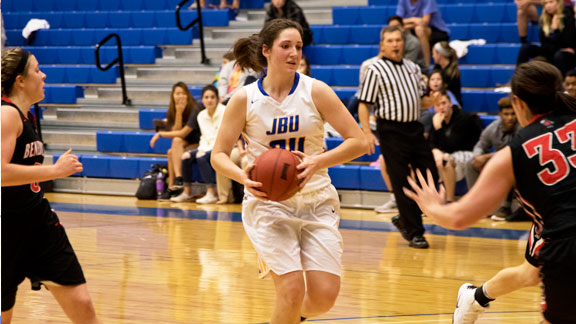 SILOAM SPRINGS – Sophomore Baily Cameron posted a double-double and the John Brown University women’s basketball team lead for most of the contest, but a fourth-quarter comeback led by sophomore Preslea Reece guided the Golden Eagles to a 70-66 win over No. 11 Benedictine (Kan.) on Tuesday (Nov. 1) evening inside Bill George Arena.

The Golden Eagles held Bendictine to 2-of-6 from the field in the final 60 seconds and senior Kodee Powell went 4-of-4 from the line down the stretch to seal the season-opening upset victory.

“I thought we played well at times, a typical first game,” admitted head coach Jeff Soderquist. “We started off the second quarter hot, but then (Benedictine) changed up their defense. We got passive and stood around. In the second half, Kimmy (Deines) and others started to attack, getting it inside.

“I was very proud of how we handled giving up the lead and sticking with it. You know everyone is going to be after Baily (Cameron), and I thought Preslea (Reece) stepped up and hit those big threes and that soft corner shot and really stepped up for us tonight.”

Cameron nabbed a double-double with 22 points and 10 boards while Reece finished with 18 points on 7-of-12 shooting from the floor. Powell hit 4-of-5 from behind the arc to add 17 points as the hosts shot 22-of-55 from the field (40 percent), but more impressively hit 45 percent of shots taken from long range (11-of-24).

The Ravens, which finished the 2015-16 season in the national semifinals, was led by Kristen Murphy’s 18 points while LaRanda Smith hit four triples to contribute 14 points. Ali Taff produced 11 points in the loss and dished out a game-high eight assists.

While both teams committed over 15 turnovers, John Brown made the Ravens pay to the tune of 21 points. The majority of the match was played close, featuring four ties and five lead changes.

JBU will now enjoy a six-day break until returning to action on Monday (Nov. 7) when the Golden Eagles host Ecclesia (Ark.) at 8 p.m.