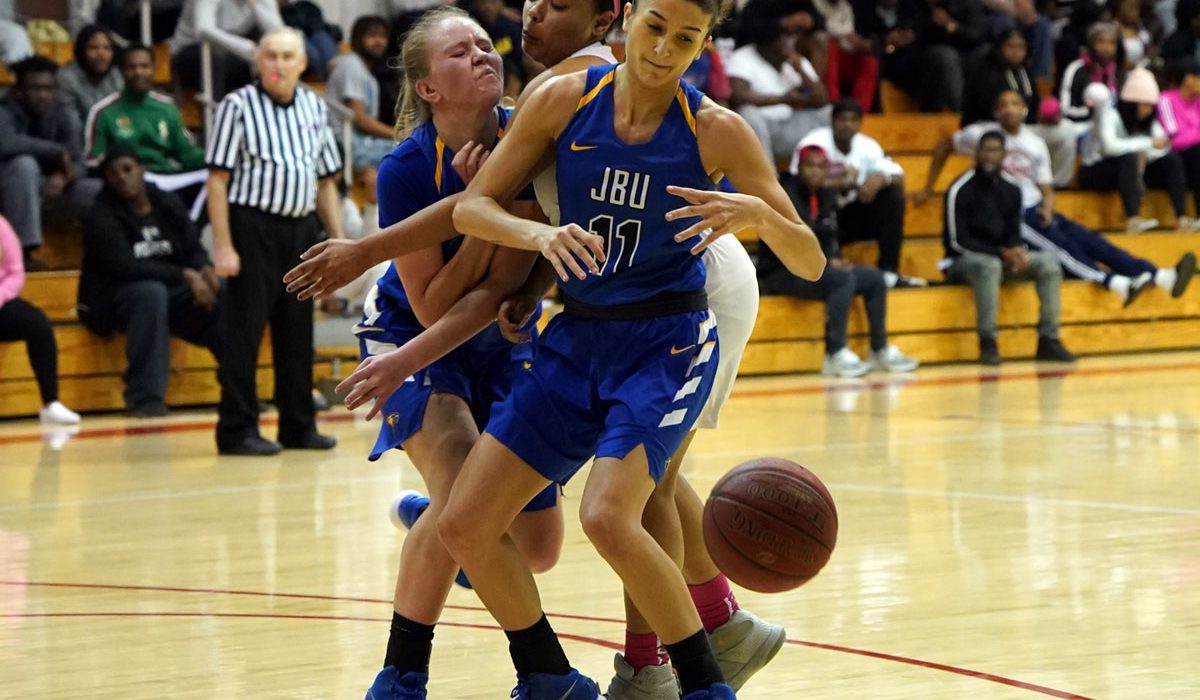 MUSKOGEE, Okla. — Plagued by a season-high 30 turnovers, the John Brown University women’s basketball team battled through the difficult Warrior press and finished the contest on a late rally to take a 67-64 come-from-behind victory on Tuesday night (Feb. 13) inside the Palmer Gymnasium.

For the second consecutive season, junior Baily Cameron went off for a game-high 30 points, hitting 13-of-17 from the floor, no three shots more important than with the game on the line, as the Golden Eagle leading scorer hit three-straight shots in the paint in the final two minutes.

Cameron pulled John Brown (16-9, 9-6 Sooner Athletic) within one with a post move off a feed from sophomore Sara Williams with 1:51 left in the contest, before taking matters into her own hands on the next possession by hitting a spinning left-handed layup to put the visitors on top, 65-64. With the pressure mounting, Bacone coughed up the ensuing possession at the free throw line and senior Kimmy Deines grabbed the steal, raced down the court and fed an open Cameron on the right post with a bounce-pass to complete the game-clinching 8-0 rally.

After taking a 64-59 lead with 3:58 remaining, the Bacone (13-12, 5-11) offense stalled and finished the contest 0-of-10 from the field while committing a pair of turnovers, allowing JBU to capture its third win in four games.

A full-court press for most of the contest forced the Golden Eagles into a season-high 30 turnovers, but the visitors shot 53.3 percent from the field (24-of-45) and connected on 10-of-24 triple attempts, including a 7-of-8 long-range eruption in the third quarter, converted a 38-34 halftime deficit into a 55-55 tie heading into the final quarter.

Marred all night long by erratic shooting, the Warriors hit just 4-of-17 in the final stanza (23.5 percent) and allowed the Golden Eagles to take a 13-7 rebounding advantage, which JBU needed as the visitors, when presented with chances to ice the game late, converted just 2-of-8 free throws in the last 10 minutes of play.

The Warriors, a top-three rebounding team in the conference, entered the game averaging over 41 boards a game, were limited to just 30 as JBU earned a 36-30 advantage on the boards.

Bacone hit just 27-of-74 from the field (36.5 percent) and 7-of-23 from long range (30.4 percent). Cierra Miles registered 17 points and four assists while Imani Guillory added 10 points in the loss. Jakierra Drummer chipped in with nine points and a team-best 10 boards.

Cameron finished the contest with 11 boards, marking her fifth double-double of the season, and a pair of blocks. Senior Kimmy Deines came up with a big 10 points and a game-best six dimes while Schammel and senior Rosa Orpo each contributed nine points in the win.

JBU continues on in its three-game week by hosting Southwestern A.G. (Texas) on Thursday at 6 p.m. The Golden Eagles are now just a half game behind Mid-America Christian (Okla.) for fourth place, and the final spot for hosting duties in the Sooner Athletic tournament quarterfinals on Feb. 27.