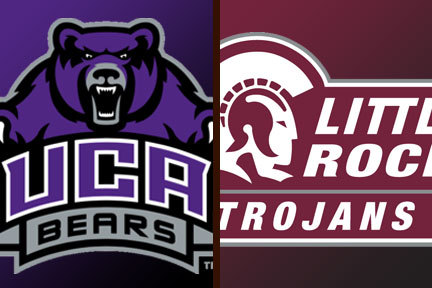 LITTLE ROCK – Marcus Johnson Jr. scored 29 points and set a new Jack Stephens Center record with nine made 3-pointers in Little Rock’s 70-59 win over Central Arkansas on Saturday. The Trojans shot 55.6 percent from 3 and made 15 treys as a team.
The win improved Little Rock to 8-2 on the season while the loss dropped Central Arkansas to 1-8.
Lis Shoshi picked up his third double-double of the season with 10 points and 14 rebounds. Shoshi added four assists, a block and a steal in 32 minutes. Kemy Osse scored 12 points while Maurius Hill chipped in eight.
Led by three players with four assists, the Trojans handed out 18 assists on 24 made field goals.
Little Rock held Central Arkansas to 31.5 percent shooting from the floor. UCA outscored Little Rock 18-7 at the foul line.
The Trojans led by five at the break, but Central Arkansas stormed back to take the lead at 47-46 with 13:49 to play. Little Rock responded with a 10-0 run punctuated by two Johnson 3-pointers to push its lead back out to nine with 11 minutes remaining.
UCA would get no closer than six the rest of the way.
Johnson’s 29 points were one shy of his career high and arena record, set against Centenary last season.
The Bears were led by Jordan Howard’s 21 points. Derreck Brooks and Mathieu Kamba also finished in double figures.
Little Rock led UCA 37-32 at halftime as Johnson made six of his 3-pointers in the first 20 minutes. The Trojans used a 7-0 run late in the half to grow the lead to 31-24 after the Bears pulled as close as three at 24-21. Central Arkansas closed the half on a 6-0 run to pull within back five.
Little Rock made nine 3-pointers as a team before halftime.
In the first half, the Trojans shot 42.4 percent compared to 30.8 percent for the Bears, but did not attempt a free throw in the first half while UCA made 12 of 15 at the charity stripe.
Next week, Little Rock travels to Flagstaff, Ariz., to face Northern Arizona on Wednesday. Tipoff is set for 7:30 p.m.