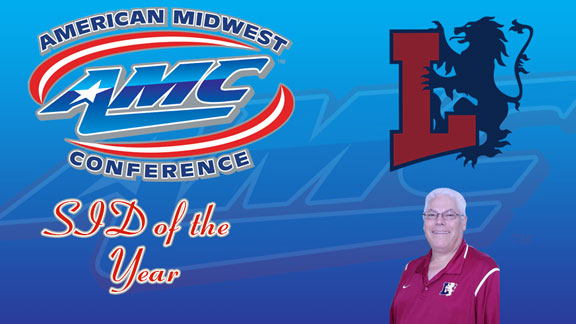 ST. LOUIS – When the Lyon College Scots joined the American Midwest Conference in 2012-13, the Scots also brought in John Krueger as the school’s Sports Information Director. Finishing his fourth year at Lyon, Krueger was named as the AMC SID of the Year on Wednesday afternoon.

“John is one of the best sports information directors around,” AMC Commissioner Will Wolper said. “The growth of Lyon’s visibility through local and social media over the past four years, the ability to increase revenue while providing opportunity for Scot fans to follow the team from afar is remarkable and all made possible by John’s efforts. This honor fiven John by his peers in the AMC is very much deserved.”

Krueger took over as SID and immediately began bringing the Scots toward the forefront in Sports Information. He has helped grow the online presence of Lyon College in his four years, increasing their Facebook audience to nearly 3,500 likes, and the growth of its Twitter following by ten-fold. In 2015-16, the Scots finished seventh in the NAIA-SIDA Facebook contest for likes gained.

Krueger has also been instrumental in starting up Lyon College online video broadcasts and photo sales. Combined, the revenue from photo sales and video pay-per-view broadcasts have generated over $6,000 per year in additional revenue for the Scots athletic department.

He also has been instrumental in the growth of the Lyon College athletic website, overseeing a pair of website re-designs and a move to their current online home – lyonscots.com.

Krueger serves as the liaison between Lyon College Athletics and the 42 media outlets covering the Scots on a regular basis. In addition to those duties, Krueger has been active in the AMC, the NAIA, and the College Sports Information Directors of America (CoSIDA). He has helped at numerous AMC Championship events, along with serving at the NAIA Division I Women’s Basketball Championship in Independence, Mo. in 2015 and 2016. Krueger also serves on the CoSIDA Academic All-America® Committee.

Krueger has a long history of seeing his outstanding work recognized. Beginning in the 1984-85 season when he was recognized as the Sportswriter of the Year for the Gulf Star Conference, Krueger has accumulated 23 awards for outstanding journalistic achievement, including four Photographer of the Year honors from the North and East Texas Press Association.