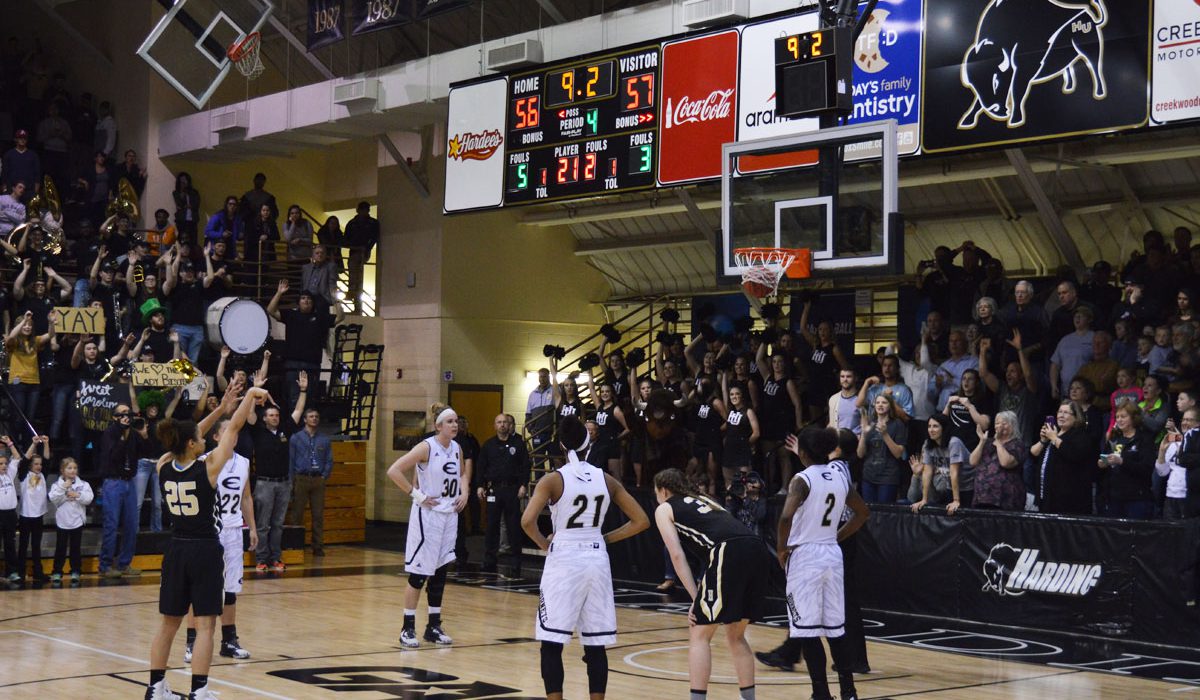 SEARCY—The Harding Lady Bisons were named NCAA Division II Central Region champions after staging a furious 18-point comeback, and they got to do it all in front of their home crowd.

The No. 2 seed Lady Bisons (30-3) defeated the top seed Emporia State Lady Hornets (29-5), 58-56, in an instant classic on Monday night. The win advanced the Lady Bisons to an Elite Eight appearance next week in Columbus, Ohio.

The Bisons are the first team in Great American Conference history to make it to the Elite Eight. The win gave Harding 30 wins on the year, the most in team history.

The game was played in front of a sold out Rhodes-Reeves Field House. Bisons coach Tim Kirby said the crowd’s energy was huge for his team’s success.

“The crowd really got into the game, I can’t say enough about that,” Kirby said. “They were worth some points tonight.”

Sydnie Jones and A’ndrea Haney led the Bisons in scoring, each with 16. Caroline Hogue also added 13. Kathryn Flott led the Hornets with 18 and Addie Lackey added 13.

The Bisons outscored the Hornets 34-18 in the second half, 16-8 in the fourth. The Hornets came in averaging 78.2 points per game, but the Bisons held them 22 points below their average.

The Bisons made it a one-point game after Hogue converted an and-1 layup to make it 50-49 with 6:07 remaining in the fourth. The next basket did not come until 3:53 when Jacee Kramer connected on two free throws to extend the Hornets lead to 52-49.

Each team traded buckets for the next three minutes until Jones gave the Bisons a 57-56 lead after connecting on a layup with 41 seconds remaining. This was their first lead since 7-6 early in the first quarter.

Riley Rose split a pair of free throws with nine seconds left that put the Bisons up two. The Lady Hornets called a timeout with 4.4 seconds remaining and the crowd was electric. The Hornets had a nice look at a right-side three but Addie Lackey could not connect and Rose secured the rebound to end it. Haney credited her teammates’ effort and the crowd when describing the last stop.

“I think it comes down to heart and wanting it more. That’s all defense is,” Haney said. “We had faith in each other that we could do our jobs and the crowd really pumped us up.”

Coach Kirby spoke highly of Haney after the game and got emotional when talking about her importance to the team.

“I brag on A’ndrea all the time. Her toughness and the great shape she is in pays off in games like this,” Kirby said. “This is the toughest person I’ve ever met.”

The Hornets held a 38-24 lead at half and their lead grew to 18 with 8:55 left in the third. Just when the Bisons seemed to be done, they went on an 18-6 run to close the third quarter only trailing by six. Five different Bisons scored during the run, including a three from Peyton Padgett to make it 48-42 Hornets with 2:32 left in the third. Neither team scored to finish the quarter.

The Bisons went cold in the second and the Hornets took advantage as they outscored them 24-13 in the quarter. Offensive rebounding was a key factor in the Hornets run, as they scored 12 second chance points compared to the Bisons two. The Hornets had 21 offensive rebounds on the night.

The first quarter was tightly contested as the biggest lead was four. The Hornets outscored the Bisons 10-6 in the paint and took a 14-11 lead into the second.

The all-tournament team was announced after the game. Bisons Hogue, Haney and Jones were selected along with Hornets Kelly Moten and Flott.

The Elite Eight begins on March 21.