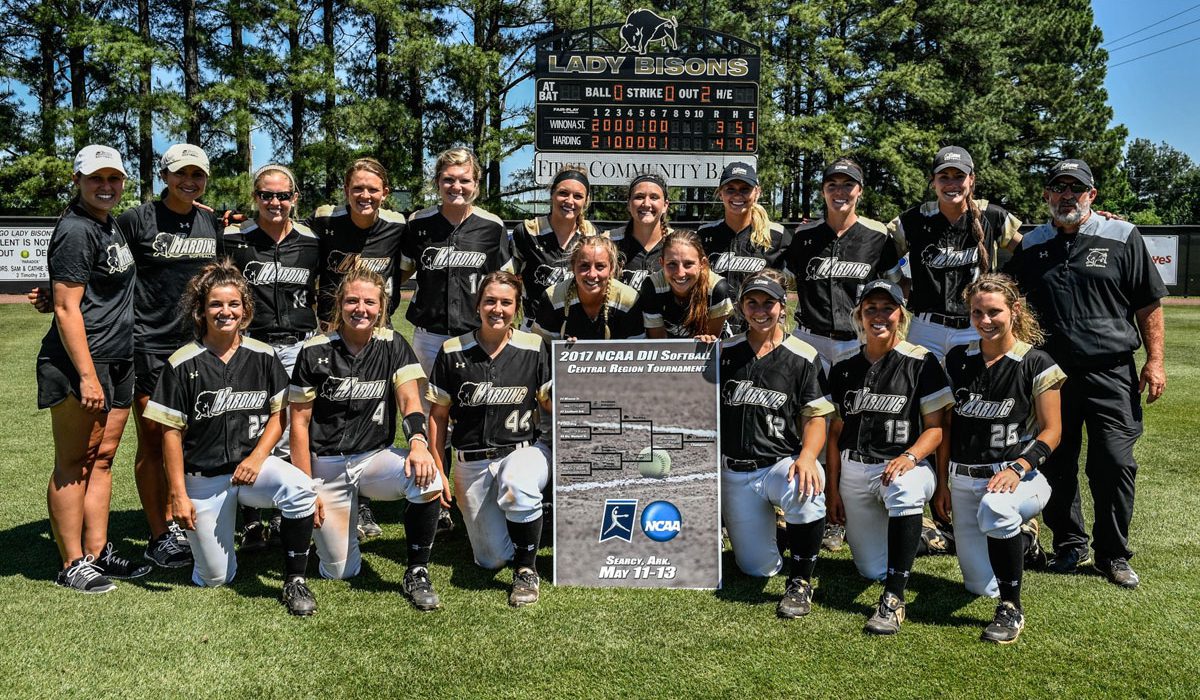 SEARCY – Harding sophomore Alexus Lawellin scored on a wild pitch with two outs in the bottom of the seventh inning to give the Lady Bisons a 4-3 victory over Winona State and the NCAA Division II Central Region 1 Tournament championship on Sunday at Harding Softball Field.

With the victory, No. 2-ranked Harding moved into the Super Regional next Thursday and Friday against Minnesota State. Harding will host the best-two-of-three Super Regional with Thursday’s game beginning at noon. Friday’s games are scheduled for noon and 2:30 p.m., if necessary.

It took two games Sunday for Harding to advance. Winona State (52-13) won the opener 3-2 to force the deciding game.

In the seventh inning of game two, Harding’s Courtney Derrick led off with a single to left center, and Lawellin followed with an infield hit. Derrick was thrown out at third on a sacrifice attempt that sent Lawellin to second. Autumn Humes‘ ground ball to second base moved Lawellin to third. On Winona reliever Jordyn Kleman’s second pitch to Kimmy Hendricks-Campbell, Hendricks-Campbell checked her swing on a high outside pitch that deflected off the glove of catcher Paige Keegan. Lawellin raced home from third and slid under Kleman’s tag.

Harding fell behind early in game two. Winona State scored two runs in the top of the first off Harding starter Hannah Johnson, but Johnson stranded the bases loaded in the inning.

Harding answered with two in the bottom of the first. Lawellin scored on a throwing error, and Hendricks-Campbell drove in Peyton Mills with a single.

Johnson again stranded the bases loaded in the second, and Harding took a 3-2 lead on Derrick’s single to center that scored pinch runner Kimberly Slaughter.

Harding held the lead until the fifth. Winona State scored the tying run on a Harding throwing error, but Humes came in to pitch for Harding and stranded two more runners. Winona had 10 left on base in the second game.

Humes (33-1) pitched the final three innings and did not allow a hit. She walked one and struck out three. Kleman (20-8) allowed only the winning run over five innings and took the loss.

Winona scored the winning run in the top of the seventh inning in game one. Starting pitcher McKenna Larson (26-6) drove in Samantha McLean from third base on a sacrifice fly.

Harding opened the scoring in game one with two runs in the bottom of the second. Winona tied it with two in the third.

Larson allowed only three hits and two earned runs in seven innings. Johnson (23-5) took the loss in the opener despite not allowing a hit over 1 2/3 innings of relief.