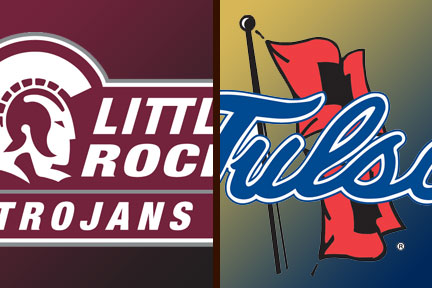 TULSA – The Little Rock women’s basketball team trailed by as many as 15 points in the second half, but an offensive and defensive resurgence allowed the Trojans to storm back for a 63-58 victory over Tulsa at the Donald W. Reynolds Center on Sunday afternoon.

Kyra Collier scored a career-high 15 points and more than doubled her career high in rebounds with 17 for her first collegiate double-double. Sharde’ Collins tied for the team lead in scoring with 15 points, and Kaitlyn Pratt added 15 points as well and nine rebounds. Ronjanae DeGray was Little Rock’s fourth double-digit scorer, putting up 10 points.

Little Rock’s 63 points were the most it has scored all season, and Sunday marked the first time this year that Little Rock had four players reach double-figure scoring.

The Trojans also dominated the Hurricane on the boards, pulling down 51 total rebounds to Tulsa’s 32. That margin included a 21-5 edge for Little Rock on the offensive glass. Little Rock last recorded more than 50 rebounds against Incarnate Word on Dec. 10, 2013.

For nearly two thirds of the game, things appeared to be destined for a Tulsa win. But Little Rock completely turned things around midway through the third quarter. Tulsa led 45-34 with 5:21 to play, but Little Rock closed the period on an 8-2 run to make the Hurricane’s lead a manageable 47-42 entering the fourth.

It took the Trojans another five minutes of chipping away at Tulsa’s lead before they finally broke through, but a Collins jumper with 4:29 remaining finally put Little Rock ahead for the first time all game. Tulsa’s red-hot shooting dried up in the period as the team went just 4 of 15 from the floor.

Tulsa began the game on a 9-0 run before a pair of Collier free throws 4:30 into the game got the Trojans on the board. The Trojans got within one at 19-18 early in the second quarter by scoring its first 4 points, but the Hurricane followed with a 12-0 run and entered halftime leading 33-22.

Carolee Dillard scored 4 points for Little Rock, recording her first points since 2013. Monique Townson had a team-high four assists in 38 minutes. The Trojans scored 34 points in the paint.

The Trojans play one more non-conference game this season on Wednesday, squaring off against the Tigers of LSU. Little Rock and LSU are set for a 7 p.m. tip at the Maravich Center.