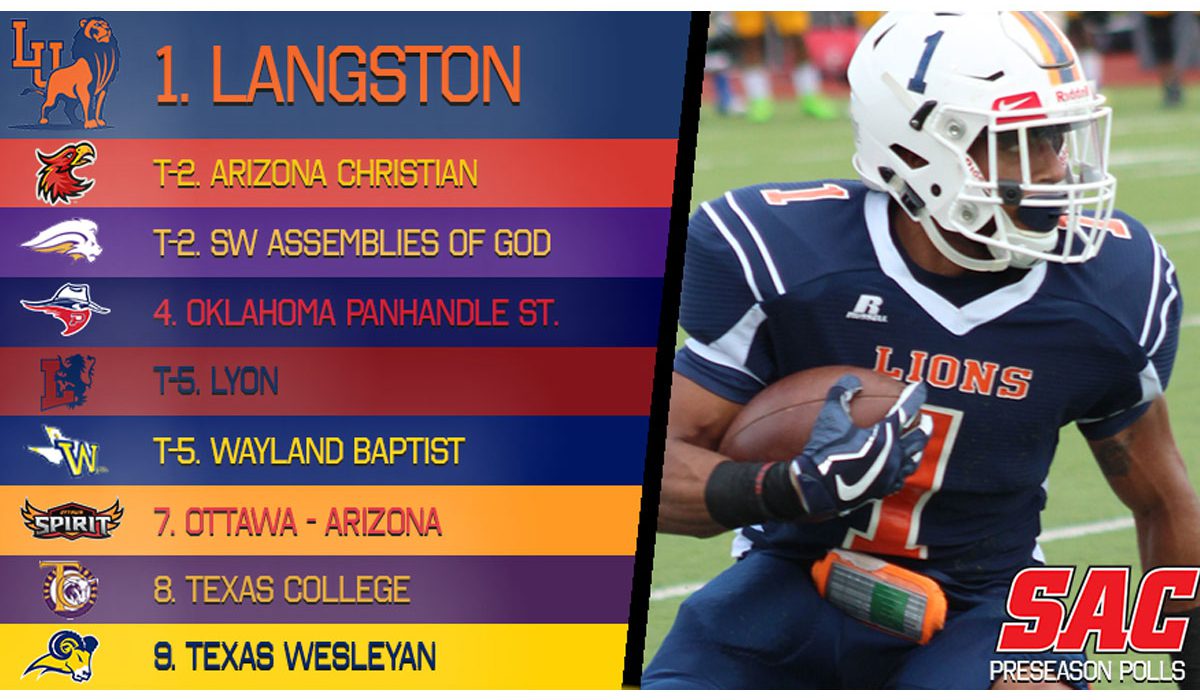 Collins, a senior from Bosqueville, Texas, produced 2,840 yards and 26 touchdowns passing last year for the Lions. He ranked 15th in the NAIA in passing yardage to grab league player of the year.

Leithead, a junior from Colorado Springs, Colo., picked up 69 tackles, 32 solo tackles, 2½ sacks and an interception for the Aggies to snag all-league acclaim. Gomez, a junior from Wilmer, Texas, connected on 9-of-12 field-goal attempts and 37-of-39 extra-point attempts while averaging 39.5 yards on punts to make the all-league team.

Langston comes off a 10-1 season where the Lions went unbeaten until the NAIA Championship Series and won the Central States Football League championship. Langston collected seven of the possible nine first-place votes to total 63 points in the poll and enter the year as the preseason conference favorite. Jaylen Lowe, a senior quarterback from Collinsville, Okla., had 1,116 yards and 11 TDs through the air for Langston to be league athlete of the year in 2017.

Panhandle State finished fourth in the poll with 46 points, while Lyon and Wayland Baptist were knotted for fifth at 30 points. Ottawa-Arizona enters its first year of playing football at seventh in the preseason SAC poll. League coaches predicted Texas College to finish eighth, and Texas Wesleyan took ninth in the poll.

This year marks the inaugural football season for the SAC, whose member schools have amassed an NAIA-best 106 national championships in 14 sports throughout its 40-year history. The first game of 2018 featuring an SAC member happens Thursday, Aug. 23, when Southwestern Assemblies of God visits Evangel (Mo.) for an ESPN3-broadcasted bout. The first ever SAC contest is set for Saturday, Sept. 8, when Ottawa-Arizona visits Langston.

NOTE: Votes were cast by each of the nine head coaches. Coaches could not vote for their own team.