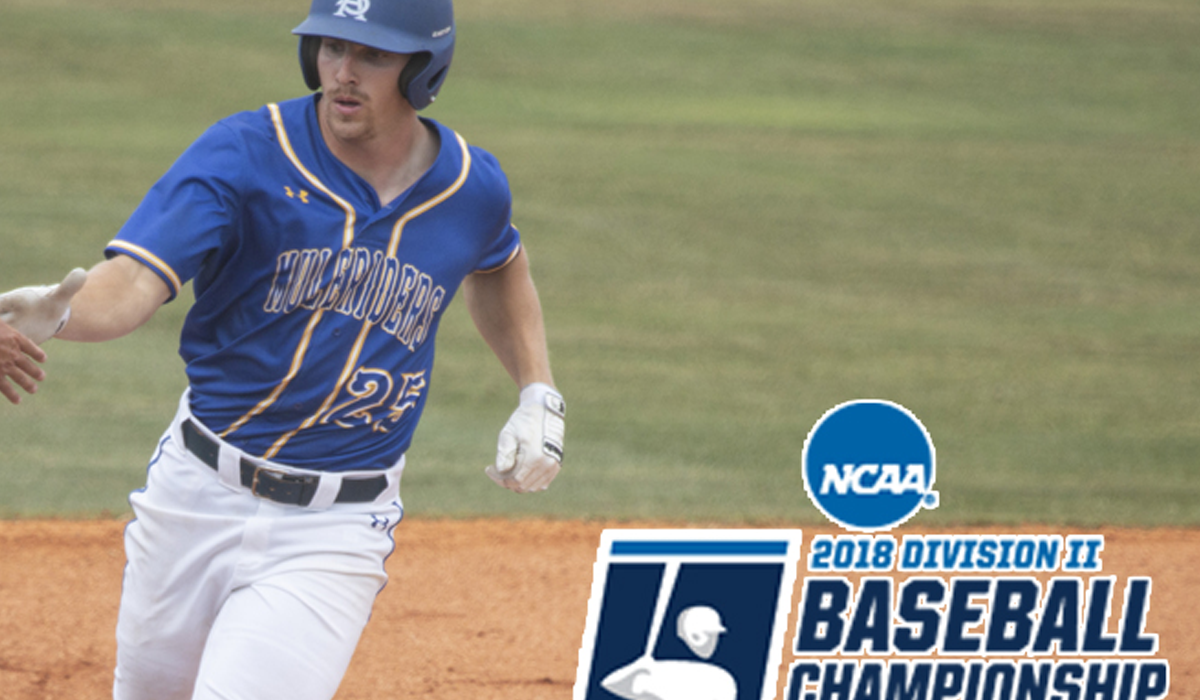 MAGNOLIA – It was nothing but fight for No. 14 Southern Arkansas on Monday afternoon from Walker Stadium at Goodheart Field as the Muleriders rallied to take the first game of the day over No. 11 Augustana, 5-3, to force the “if necessary,” winner-take-all contest, which resulted in the Vikings claiming a 6-3 victory, as they held off a gritty Mulerider rally, to win the Central Region Championship.

Southern Arkansas’ postseason run comes to an end, but not before the Muleriders posted an impressive 9-2 mark when facing elimination. Additionally, the 2018 club reached and topped the 40-win mark giving the program its tenth 40-win season of the last 17 years.

In the opener, the Muleriders trailed 3-1 heading into the seventh inning, but back-to-back singles from junior Dakota Wright and redshirt freshman Cole Boyd set the table for freshman Riley Orr, who after fouling the first pitch he saw in the at bat off of his leg, singled into the opposite field in right to chase home Wright and pull Southern Arkansas within a run of the lead.

The Muleriders weren’t finished as they struck for three more runs in the eighth inning. Senior Sam Mrstik, who put SAU on the board with a solo blast in the fourth inning, walked to leadoff the frame. Classmate Jacob Richardson then plated Mrstik by hammering the first pitch he saw from Viking reliever Zach Reeg off the centerfield wall to tie the game at 3. The run surrendered by Reeg was the first of the season for the senior who entered having tossed 25.0 innings of shutout baseball while allowing only seven hits.

The next pitch Reeg threw did not have a positive result for the Vikings either as senior Cortland McPherson launched a two-run shot out the right field to give Southern Arkansas a 5-3 lead, while energizing the Walker Stadium faithful in the process.

The two-run cushion would be more than enough for junior reliever Nick Starr who, after entering with one out in the sixth inning, worked the eighth and the ninth innings with the lead as he finished off the Vikings to earn the win for SAU in relief.

As was the case all postseason, the Southern Arkansas pitching staff thrived in elimination contests as senior Jacob Stroder, on just two days’ rest, went 5.1 innings and scattered seven hits and a pair of earned runs to hold the Augustana bats at bay before the Muleriders broke through in the aforementioned eighth inning.

Trailing 6-1 heading into the home half of the eighth inning, the Muleriders received what ended up being their final run of the season on a solo blast down the left field line from the bat of Richardson. SAU threatened in the ninth inning with runners at the corners and one out, before the Vikings managed to escape the threat.

Orr pushed an outside pitch in the air that for a moment looked like it was going to drop in right field to plate a run and keep the inning alive, but a running catch was made to end the game.

The Muleriders collected 15 hits on Championship Monday and Richardson accounted for a third of them. McPherson led the team with three RBI, while Richardson, Wright and Mrstik each scored a pair of runs for Southern Arkansas.