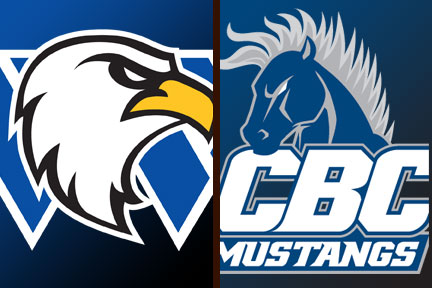 CONWAY –  Central Baptist got off to a fast start in route to its first American Midwest Conference win at home over Williams Baptist College, 92-81.  The Mustangs never trailed and led by 21 at one point.

A  Jayln McBride three-pointer followed by a Marcelious Green shot from beyond the line would put CBC up 6-0 fast.  Scoring leader Fred Albright would get into the action to make it 9-2.  A Justin Harris jumper with two minutes left in the half would make it a thirteen-point lead, 36-23.  CBC would go into the half leading 40-28.

CBC would force eight turnovers in the first half while committing just one.  The Mustangs would shoot 58.6% from the field.

A two-point jumper from Green would put CBC up 21 with 14 minutes to play in the game.  Someone forgot to tell the Eagles as they begin a pressure defense that disrupted CBC. Williams was able to cut the lead to six points, 77-71 with just under five minutes to play.  Free throws in the final minute would give CBC its final margin.